JNN 10 Dec 2010 Karachi : Today the Van carrying the Shiite Youth belonging to the Volunteers core of Jafria Alliance Pakistan was attacked and fired , when they were coming in a private van and crossing the English Biscuit Causeway route coming from Korangi Industrial Area .

In this Incident three Shiite youth received bullet injuries , who were directly rushed  to the Hospital , where they were treated , one was serious , but till the filing of this report , Just one was in the hospital , and was said to be out of danger , while the rest were discharged after giving them necessary Medical treatment. 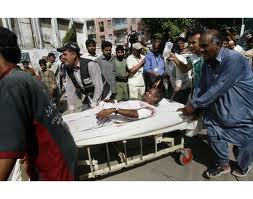 This has been pointed out to the Law Enforcement Agencies and the Civil Administration several times that the best thing to protect the lives of Innocent Shia Citizens and in Particular Residents of Karachi the focus is to be on nabbing and putting behind bars and properly prosecuting the Members of the Banned Terrorist Organisations , who are still running their Sector and Unit Offices in different areas of Karachi, even after that there Organisation have been banned by the government. Instead of cordoning of the Majalis and the Religious Parades ,the emphasis should be on doing a crack down on the terrorists , as if the city and the country will be free of these anti Islam and Anti Pakistan terrorist , there will be no need of High security measures and all the Peace loving citizens of Pakistan , will live in Harmony , as they were living there life , before the birth of these illegitimate terrorists .

JNN 10 Dec 2010  Hangu : A powerful car bomb explosion at the gate of the Shiite Run Hospital has killed at least 18 people and wounded several others in Pakistan’s troubled Pass Kalay area in Hangu which is located in the northwestern tribal belt.

A suicide bomber blew up a trailer packed with explosives at a northwest Pakistan hospital Friday, killing 11 people and apparently targeting Shiite Muslims in the third  bombing & terrorism  this week.

The suicide bomber detonated at the gate of a Shiite-run hospital on the outskirts of the northwestern town of Hangu, a flashpoint for sectarian violence that traditionally flares during the current holy month of Muharram.

“It was a tractor with a trailer a carrying 250 kilograms of explosives hidden underneath materials for construction work at the hospital,” he said.

The hospital is run by a private Shiite Muslim trust, which also operates a nearby Shiite mosque and seminary, local officials said.

The blast partially damaged the mosque, vehicles and houses, and gouged a large crater out of the ground, police said.

Two days ago a teenage suicide bomber killed 17 people at a busy market in the garrison town of Kohat, which neighbours Hangu and which has been another flash point for attacks on Pakistan’s minority Shiite community.

Pakistan has stepped up security for Muharram, which began this week and sees tensions rise due to these bombing and terrorist activities of Banned and Proclaimed Wahabi Terrorist Organisations , which try to paint their terrorist activities as of sectarian rift , but actually they are just One sided terrorist activities against the Shiite Population of Pakistan , as there have been no revenge or offensive activities by the Shiite community , who are living in peace and Harmony with there Sunni Muslim Brethren since the creation of Pakistan , But these Wahabi Saudi funded Organisation , paint there terrorist activities as of sectarian between Pakistan’s majority Sunni Muslim and minority Shiite Muslim communities to create chaos and anarchy in the country by engaging the Sunni Population in their terror plots , which even the Sunni Population have become aware of their nefarious design and also condemns there killing of Shiite Muslims , along with attacks on Shiite religious parades.

Around 4,000 people have died in suicide and bomb attacks across Pakistan since government forces raided an extremist mosque in Islamabad in 2007. The attacks have been blamed on networks linked to the Taliban and Al-Qaeda.

On Monday, a pair of suicide bombers killed 43 people, attacking anti-Taliban militiamen and pro-government elders in Mohmand, part of the tribal belt that Washington considers the global hub of Al-Qaeda.

The Pakistani Taliban purportedly claimed responsibility for that attack, threatening death to anyone who forms militias against the Islamists.

On Tuesday, a suicide bomber tried to assassinate the chief minister of Pakistan’s southwestern province of Baluchistan, damaging his motorcade and wounding nine people but leaving the minister unhurt.

A purported spokesman for the banned extremist group Lashkar-e-Jhangvi claimed responsibility, saying the official had been targeted for efforts to provide security to Shiite Muslims, who are frequently attacked in Baluchistan.