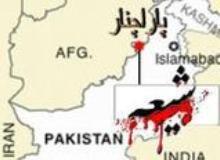 JNN 19 Dec 2010 : Tens of thousands of Shia Muslims in a Pakistani tribal region called for end to a 4-year siege of northwestern city allegedly by Taliban militants, as the blockade has increased difficulties of the people.

The demand was made by Shia Muslims in the Ashura day procession in Parachinar, the center of Kurram tribal agency.

Some two hundred thousands Shia Muslims took part in the Ashura procession, which started at 8 a.m. and continued till late night on Friday.

The procession was started from main Imambargah in Parachinar city and after passing via Kurram militia, Turi graveryard, katchery road and hazara graveyard ended in Central Imambargha at night time.

Through out the route of Procession mourners including all ages and children with addition to non-Muslims even Christians and hindus were beating their chests by doing ‘matam’ and zaadari. Azadars were also chanting Labik Ya Hussain, Down with USA, Down with Israel, Down with Taliban.

Addressing the biggest gathering of aazadars, ulema and scholars told that the people of Parachinar and martyrs set a new example of resisting and defeating the Taliban.

They condemned attacks on Shia Muslims in Quetta, Peshawar and Hangu, murdering innocent children and women by yazeddi forces.

They said that if the govt does not lift the four years imposed siege and economic blockade, then they will start armed long march from Parachinar to Thall to open the main road and the responsibility will be on all concern

2 thoughts on “Ashura Processions in Parachinar, while it still bleeds due to 4 years siege By Taliban”