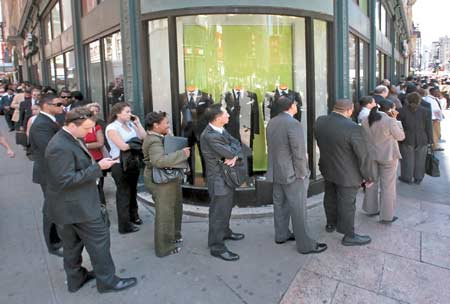 08 Jan 2011 : While the recent drop in the official unemployment rate is attributed to the fact that Americans have given up looking for jobs, a former Senate candidate says that the actual jobless rate stands at 21 percent.

“When you look at the overall joblessness picture, and the fact that the true unemployment rate in the United States, as Paul Craig Roberts has pointed out is actually somewhere around 21 percent; not the 9 percent that has been advertised,” former US Senate candidate Mark Dankof told Press TV.

As the aftermath of the great recession and the vaulting debt crisis continue to wreak havoc on the US economy, Dankof argued that less job opportunities that came along with “13 millions more immigrants that have come to this country to live… created a lot of tensions in the entirety of the situation.”

Federal Reserve Chairman Ben Bernanke said on Friday that “it could take four to five more years for the job market to normalize fully.”

Experts say that the US economy needs to create nearly 125,000 jobs per month to keep pace with the country’s population growth and avoid a rise in the jobless rate.

The fall was the first of its kind since mid-2008; however, it is attributed to the fact that 260,000 had given up looking for jobs.

One thought on “US unemployment rate stands at 21%”