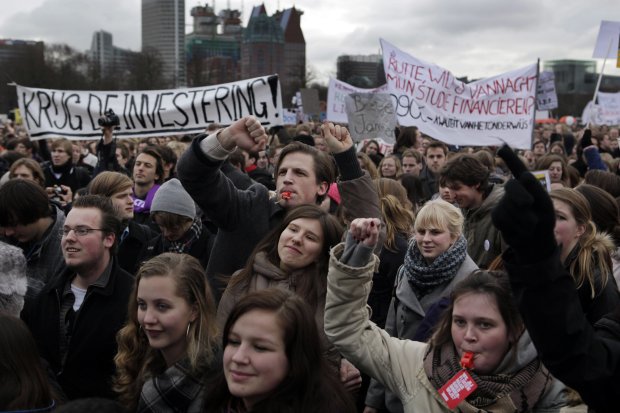 JNN 19 Feb 2011 Hague : Dutch Unions say some 10,000 workers took to the streets of The Hague on Thursday to protest against public spending cuts and a government proposal to freeze pay.

This is while unions have been negotiating with the government for a two percent raise.

The government says the cuts would help the country’s recovery following the economic crisis.

Abvakabo, a union for public sector workers, has warned that the plans threaten some 110,000 jobs.

Addressing the rally on Thursday afternoon, Donner promised workers that the government was planning to increase their wages but that it lacked the financial resources to do so at the moment.

The rally came one month after around 15,000 students and university lecturers demonstrated against planned university cuts.

Earlier this month Donner sought to reassure civil servants in an interview with the daily NRC Handelsblat, downplaying their concerns over redundancy.

Asked on his response to the unions’ demand that the government issue a job guaranteed, he said that since a “great number” of workers would retire by 2015 due to their age, there was no need for concern as younger people who have already been laid off could fill in.