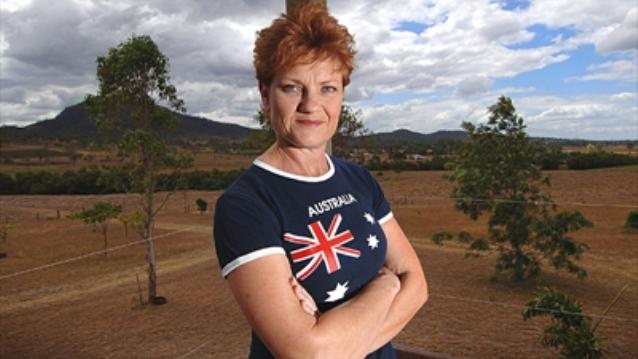 JNN 14 Mar 2011 : If Muslim people are not willing to assimilate into a democratic Australian society, “don’t come here at all”, says former One Nation politician Pauline Hanson, who’s making a comeback in NSW.

The West and the US who are pose as champions of Liberalism and Freedom of Speech , who now coming out of their shells as they feel the Muslims of the world are coming in terms with them , till they are sub ordinates or lesser in power they were giving them lessons of freedom of speech and Liberalism , but as now the muslims may come in power , and they are ready to speak the truth on there faces ,then their racism and inner hatred is coming out . As they just want to dictate there own terms , which benefit them . while when the Muslims of the World are fighting for Democratic Govt in there countries , Like Libya , Bahrain , Yemen , Saudi Arabia, and Kuwait they dont support the Protester, Instead support their partner Dictators , which favours them , whether Gaddafi , who is killing thousand of People , Al e Saud Abdullah who doesnt give right to the people even to say , or saleh bin abdullah , Nobody from the western world condemns even , while they say whole of the Muslims are against Democracy.

Ms Hanson has told Fairfax Radio Network she gets annoyed when she hears Muslims say they don’t support democracy.

“I get annoyed when I hear an interview by a Muslim who says, `We don’t believe in democracy'” she said on Wednesday.

“We are a democratic country and my concern is if that’s your belief in coming here to Australia, why come here?”

These people should stay in a country where they have their own cultural beliefs, Ms Hanson said.

“Come here to assimilate, to integrate,” she said.

“If you’re not prepared to come to a democratic society, then don’t come here at all.”

Ms Hanson is standing for an upper house seat in the NSW election on March 26.

The way some Muslim people viewed women was also a problem, she said.

“I’ve got young girls that have emailed me and said to me, `We feel threatened, we don’t like the way they treat us’.

“I hear people that have Muslims live in their streets and they are rude and people don’t want that.”

Ms Hanson said she stood by comments she made in 2010 that she would not sell her house to a Muslim.

“I won’t back down from that at all,” she said.

“That’s my opinion and actually a lot of other people have said that as well.”

She denied her opinions made her a racist.

“I’ve never made one racist comment in my life,” she said.

“Criticism is not racism.

“We have a right to question things.”

If elected, she would offer “truth and honesty” to the people of NSW.

“What do people want? Do they want truth and honesty from their representative, or do they want a `yes’ person?

“I’m putting myself back out there again, because I’m not going to roll over and let them dictate to me for the rest of my life.”

Ms Hanson said she would be pushing to stop the NSW police force having to answer to the police minister, so they can run their affairs separate from the government.

One thought on “Muslims should leave Australia or Assimilate : Australian Politician Pauline Hanson”