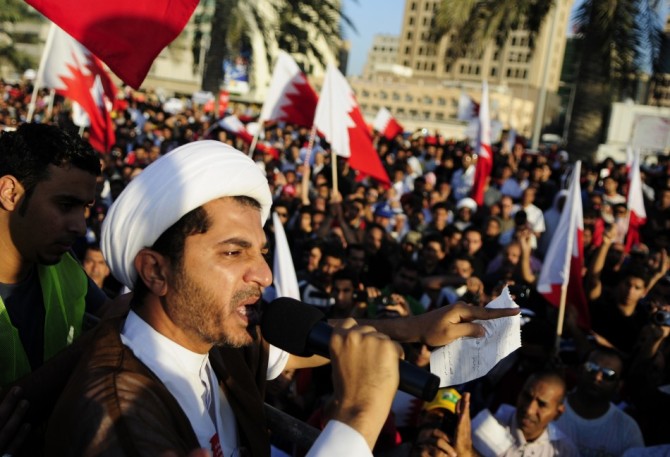 JNN 19 Mar 2011 : Bahrainis will continue with the anti-government protests until their demands are met regardless of the regime’s brutal crackdown backed by foreign military invasion, an analyst says.

“The people in Bahrain will continue with their demands peacefully… and they will not go home without a resolution for what they demand,” said Sheikh Ali Salman with Bahrain’s al-Wifaq Society in a Saturday interview with Media Correspondent

He pointed to the Bahrainis’ unwavering resolve in adhering to their cause (intifada) and noted that time was ripe for the small ruling kingdom to deliver on people’s demands and relinquish power.

Demonstrators have been demanding the ouster of the 230-year-old Sunni-Minority led monarchy as well as constitutional reforms since February 14.

Sheikh Salman added that “other institutions” must now replace the minority ruling dynasty in order to keep the small Persian Gulf state from further chaos.

The political party member in Manama said that Bahrainis “believe in a peaceful movement and revolution” despite the foreign military incursion into the country.

On Friday, Bahrain TV showed footage of a convoy of troops from the United Arab Emirates (UAE) arriving in the capital Manama following a similar intervention by Saudi Arabia forces.

Sheikh Salman referred to the arrest of opposition activists and protesters and rejected the idea of negotiations with the government’s heavy-handed clampdown on the protests.

He called on the UN to probe the killings of Bahraini citizens and accounts of inquisitions and persecutions by the order of al-Khalifa dynasty in the sheikhdom.

At least 12 people have been killed and about 1,000 injured during the anti-government protests in the tiny kingdom, where the United States Fifth Fleet is based.

The Office of the UN High Commissioner for Human Rights, Human Rights Watch, Amnesty International, and other human rights organizations have strongly condemned the military intervention and have called the action illegal.

The UN High Commision and the Western Sponsored Human Rights Organisations are verbally condemning the Invasion of Bahrain by Saudi , Qatar ,and UAE , and the brutal crack down on the Peaceful unarmed Shia Protesters , while no measure has been done till yet , even a Resolution has not been tabled in the UN to condemn the Act , as Zionist Lobby in the US and the West controls all the so called UN and Human Right Organisations.

A Bahraini protester who went missing a few days ago amid unrest in the capital Manama has been confirmed dead.

The Saudi and Invading forces in collaborations with the Bahraini forces have started Abduction of the Opposition Leaders and Protester. To crush the Movement of freedom.

An eye witness to the abduction of Bahraini opposition leaders says that Saudi forces attacked the homes of the leaders, and the leader were abducted from there homes while sources say they were taken to Saudi Arabia, which is even illegal

On Friday, Bahraini activist Ahmed Tork said in an interview with IRNA that Saudi forces had arrested the leaders from their homes in the middle of the night, and that all the leaders except for Sheikh Ali Salman, had been taken.

Tork further added that demonstrations against Saudi intervention had been held after the Friday prayers in most regions, especially the capital Manama.

More than 12 people have been killed and about 1,000 injured during the anti-government protests in the tiny Persian Gulf kingdom.

9 thoughts on “Bahrain’s Shias Vows to countinue their Struggle till freedom ,and ready for Martyrdom”