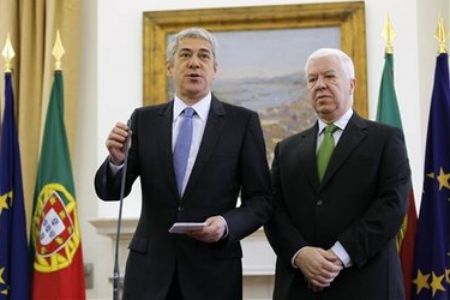 JNN 25 Mar 2011 : Portuguese Prime Minister Jose Socrates has stepped down after the parliament voted against the latest package of austerity measures offered by his minority government.

Socrates announced his resignation on Wednesday as EU members are expected to hold a key summit on the eurozone debt crisis on Thursday.

“The opposition removed from the government the conditions to govern. As a result I have presented my resignation to the president,” he said after his meeting with President Anibal Cavaco Silva, AFP reported.

“Today every opposition party rejected the measures proposed by the government to prevent that Portugal resort to external aid,” Socrates said during a televised address.

Socrates’s ruling Socialist Party only has support of 97 lawmakers in the 230-seat parliament.

The main opposition centre-right Social Democratic Party (PSD) along with smaller parties on the left and right blocked new austerity plans which include further takes hikes and cuts to social spending.

The PSD believes the measures would hurt the poorest levels of society hardest.

“This crisis will have very serious consequences in terms of the confidence Portugal needs to enjoy with institutions and financial markets,” Socrates said.

The political crisis in Portugal came as crisis-hit country needs hefty loans to pay off its nine billion euro ($12.9 billion) debt bill by a June 15 deadline.

An eventual financial rescue of Portugal would cost up to 70 billion euros (98 billion dollars), a London and Brussels-based eurosceptic think tank said Thursday.

The country would be the third in the eurozone, after Greece and Ireland, to be bailed out by the European Union and the International Monetary Fund.

In order to cover Portugal’s deficit and bond repayments for three years, the bailout would have to amount to between 60 and 70 billion euros, Open Europe estimated.

Market pressure on Portuguese debt meanwhile continued mounting. The yield for Portuguese five-year bonds soared to 8.4 per cent, the highest level since Portugal adopted the euro in 1999.

Socrates presented his resignation to Cavaco Silva late Wednesday after parliament rejected his latest austerity package. The premier was nevertheless due to attend an EU summit on restoring investor confidence in the eurozone on Thursday and Friday.

Socrates’ minority Socialist government had been trying to cut the budget deficit to 4.6 per cent this year from 7.3 per cent in 2010 in an attempt to ward off a bailout.

Cavaco Silva was due to start talks with party leaders Friday in an attempt to find a solution to the political crisis.

He was widely expected to maintain Socrates’ government in office as a transitional government until elections were held in May or June.

The president could also seek the formation of a coalition government, but that was deemed unlikely because of the bad relations between the Socialists and the opposition.

Socrates on Wednesday accused the opposition of having “blocked the entire country” by rejecting his austerity package, and warned that Portugal would have to adopt “much tougher measures” if Lisbon sought a bailout.

Socrates meanwhile faced more strikes against his austerity policies, with the Lisbon underground coming to a standstill, according to trade union sources.

There would be no underground trains in the morning hours, the sources said.