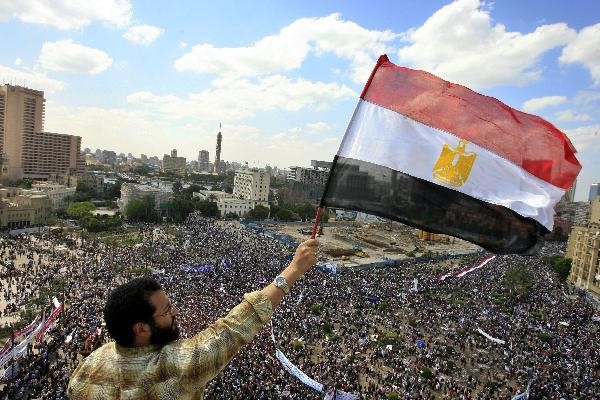 JNN 10 April 2011 : Thousands of demonstrators barricaded themselves in Cairo’s central square with burned-out troop carriers and barbed wire Saturday and demanded the removal of the military council ruling Egypt, infuriated after soldiers stormed their protest camp overnight, killing at least one person and injuring 71 others.

Protesters also marched to the Israel’s embassy in Cairo with plans to fly the Palestinian flag over the compound. This led to clashes erupting outside the Israeli embassy.

Thousands more joined the protesters in the historic square on Saturday. They demanded that the country’s military rulers hand over power to a civilian government.

The pre-dawn raid came after tens of thousands of Egyptians massed in Tahrir Square on Friday in one of the biggest rallies in weeks, demanding the military prosecute Mubarak and his family for corruption that permeated his nearly 29-year regime.

In a sign the confrontation could escalate, the military warned Saturday evening that it will clear Tahrir Square of protesters “with all force and decisiveness” for life to get back to normal.

The warning could presage a repeat of the scene before dawn, when hundreds of soldiers, including a highly trained parachute unit, swarmed into Tahrir Square, firing in the air and beating protesters with clubs and shocking some with electrical batons. Troops dragged away protesters, while others staggered away bleeding from beatings and gunshot wounds. Witnesses reported two killed, though the Health Ministry insisted there was only one death.

“It was like a horror movie,” said Mohammed Yehia, an activist and university student from the Nile Delta who was among the protesters.

The confrontation marks a dangerous juncture in Egypt’s three months of upheaval.

When longtime president Hosni Mubarak was ousted on Feb. 11 after 18 days of mass demonstrations against his authoritarian rule, protesters hugged and kissed soldiers on tanks in Tahrir Square, praising them for protecting their “revolution.” Most welcomed the handover of power to the Armed Forces’ Supreme Council, a body of top generals headed by Defense Minister Field Marshal Hussein Tantawi.

In the weeks since, tensions have rised. Protest leaders have been critical of the military council’s handling of the post-Mubarak transition and the public has been angered by its failure to prosecute the former president. But both sides also worked to stay on good terms.

The overnight clashes resembled the ugliest moments of the 18-day protest movement against Mubarak – with authorities cracking down violently and protesters chanting for the leader’s removal. The violence only fed accusations among some protesters that the military – especially Tantawi, a longtime Mubarak loyalist – was only trying to preserve the ousted president’s regime.

Soldiers detained 42 youth protesters including a British and a German national in the raid, said human rights lawyer Mohammed al-Ansari, and they now face military tribunals for violating military bans on gatherings.The military said that eight others with military uniform were arrested, in reference to the dissenting army officers who joined the Friday protest.

The protest movement appeared deeply divided over how to react. Some demanded protesters push ahead with the confrontation with the military, while others warned a conflict with the army – Egypt’s most powerful institution – would be disastrous for the movement, saying some form of coexistence must be found.

US sponsored Democracy advocate Mohammed ElBaradei,said in a Twitter message that “dialogue is the only alternative.” He said “confidence between the people and army” must be preserved “for the sake of the nation.”

Egypt’s largest Islamic group, the Muslim Brotherhood, also warned against any attempt to cause divisions between the people and the army, calling them “one hand.”

Anger flared at a press conference held at Cairo’s Journalist Syndicate, where representatives of various political parties and movements tried and failed to produce a joint statement on the night’s events.

Amr Hamzawy, co-founder of a new liberal political party, the Egyptian Social Democratic Party, called for all sides to exercise “extreme measures of restraint,” warning of “organized” attempts to cause conflicts with the military.

But Khaled Abdel-Hamid, a member of the coalition of youth activists that organized the anti-Mubarak campaign, denounced a series of incidents of excessive use of force by the military against protesters.

“Now there is blood between the people and the armed forces. This happened three times, why are they not prosecuting those responsible for it,” Abdel-Hamid said, sparking shouting matches among some defending the military and others demanding the “killers” be put on trial.

Back in Tahrir Square, several thousand protesters, some armed with sticks and other makeshift weapons, vowed not to leave until Tantawi resigns.

Black smoke rose as protesters set fire to three vehicles in the square, including two troop carriers. The square was filled with shattered glass, stones, and debris in a scene reminiscent of the anti-Mubarak protests. 11. The glass storefront of a KFC on the square was also smashed – only weeks after it was repaired from damage during the earlier unrest.

“We are staging a sit-in until the field marshal is prosecuted,” said Anas Esmat, a 22-year-old university student, as protesters dragged debris and barbed wire to seal off streets.

“Tantawi is Mubarak and Mubarak is Tantawi,” some chanted.

The military’s heavy crackdown appeared prompted in part by the presence in Tahrir of around 25 army officers who joined the protesters and were denouncing the military’s leadership, saying Mubarak was continuing to rule through Tantawi and the other generals. In a public statement Saturday, one of the officers demanded the dissolving of the Supreme Council, its replacement by a presidential council and the prosecution of those behind the killing of protesters.

The military blamed the turmoil on “thugs” who violated the country’s 2 a.m. to 5 a.m. curfew.

In a press conference, military council member Gen. Adel Amara depicted the protesters as outlaws who had attacked the army. He said protesters were carrying Molotov cocktails and two automatic weapons and that they attacked army vehicles. He suggested that the dissident army officers in the protest camp were actually prisoners, saying the protesters tied up “people in military uniforms” to exchange for detained protesters. He confirmed that one protester was killed, with a bullet in the face, but said it was not clear who shot him.

“The armed forces are a line that cannot be crossed,” he said. “The protesters kept on occupying Tahrir Square, hindering citizens’ business, which shows they don’t belong to the honorable Jan. 25 youth,” referring to the protest movement that ousted Mubarak.

At around 3 a.m. on Saturday, hundreds of soldiers backed by armored vehicles swept into the square, firing heavy barrages into the air with automatic weapons and pounding transparent shields to intimidate protesters camped out in the center. The troops waded into the tent camp, where protesters had formed a human cordon to protect the dissident army officers.

Yehia, the university student activist, described how a friend of his ripped off his shirt and stood between protesters and the soldiers, chanting “peaceful, peaceful” until soldiers beat him with clubs and electric batons, leaving him covered in bruises. Soldiers kicked and beat another man who had fallen to the ground, he said.

Ali Mustafa, a car mechanic who was guarding the “free soldiers” tent, said he saw an attacking soldier stab one of the officers to death with his bayonet. He pointed to a section of pavement stained with blood under a small pile of garbage and food remains. Witnesses reported that two of the 25 officers were arrested by the soldiers but others escaped.

Another protester was shot dead, said Ahmed Gamal, who said he helped carry away the body. The deaths could not be confirmed.

The Health Ministry issued a statement saying only one person was killed and 71 wounded, some of them with gunshot wounds, including three in critical condition.

Witnesses said the troops beat protesters with batons, fists and kicks and dragged protesters away and threw them into police trucks. Near the famed Egyptian Museum, which overlooks the square, protesters trying to flee were blocked by soldiers, who hit them and knocked them down.

Anger at the military has grown amid reports of military abuse against detained protesters – including a blogger who campagined against army abuse and was arrested and tortured by the military in past weeks.

The failure to prosecute Mubarak and his family has stoked the most anger, touted by some as a sign that Tantawi and the other generals are protecting the former president. Prosecutors have put on trial or started investigations against a string of former senior figures from Mubarak’s regime on allegations of corruption, exploiting their positions to amass personal fortunes and other crimes.

Since his ouster, Mubarak and his family have been under house arrest at a presidential palace in the Red Sea resort of Sharm el-Sheikh, their assets frozen.

In a new gesture, the council late Saturday announced a shake-up of some provincial governors and that all offices of the former ruling party were ordered seized.

One thought on “Egyptian getting ready for Revolution’s Final Stage”