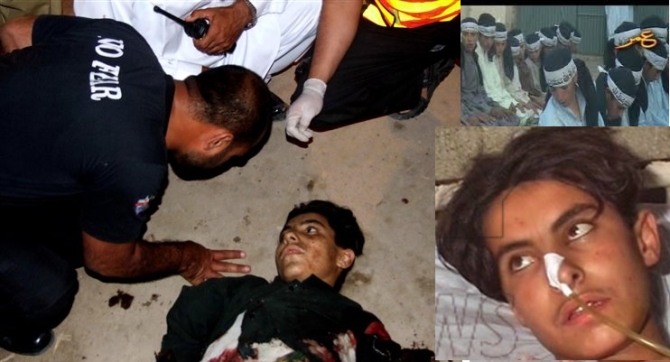 JNN 10.05.11 May 2011 : The suicide bomber, who was caught alive from inside the Sakhi Sarwar Shrine in Dera Ghazi Khan a few days ago, has claimed that up to 350 suicide bombers are being trained in Mir Ali, North Waziristan.

In an exclusive interview to Media , the bomber, Umar Fidai, said Arabs, Uzbeks and Tajiks are amongst militants in the area.

Fidai said his mission was to attack the shrine half an hour after the first wave of attacks so that people gathered at the site could be targeted. He claimed a man known as Sangeen Khan travels from Waziristan to Afghanistan and picks out targets for the bombers. He also claimed that a man known as Naeem indoctrinates the bombers.

Fidai went on to apologize to the nation for attempting a suicide attack and called on other suicide bombers to not undertake such activities.

A Tehrik-i-Taliban Pakistan commander was arrested on Lytton road following an operation by law-enforcement agencies in Lahore.

Police and other law-enforcement agencies arrested the suspect associated with the plan to target religious shrines across Lahore.

The suspect identified as a main Taliban commander claimed that he along with three accomplices were planning the attacks. The suspect has been moved to an unidentified location for further investigations.

Meanwhile, a search operation has been launched in different parts of Lahore headed by SSP Operations, Faisal Rana, to arrest the other three terrorists.

Just over 600 people have been arrested in follow-up investigations, while 352 were later released on court orders. In 2008, organizations including Lashkar-e-Islami, Haji Namdar group and Tehrik-i-Taliban were banned for alleged involvement in terrorist activities.