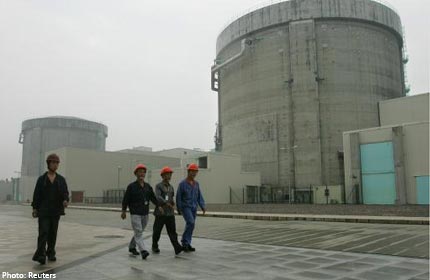 JNN 25 July 2011 : China said on Friday it had hooked its first so-called ‘fourth generation’ nuclear reactor to the grid, a breakthrough that could eventually reduce its reliance on uranium imports.

The experimental fast-neutron reactor is the result of more than 20 years of research and could also help minimize radioactive waste from nuclear energy, the state-run China Institute of Atomic Energy (CIAE) said.

China is the ninth country to develop a fast-neutron reactor, which uses uranium 60 times more efficiently than a normal reactor, helping the country to reduce its reliance on imports of the mineral.

Beijing has stepped up investment in nuclear power in an effort to slash its world-leading carbon emissions and scale down the country’s heavy reliance on coal, which accounts for 70 per cent of its energy needs.

But China’s uranium reserves are limited, and it will have to import increasingly large amounts as its civilian nuclear program gathers speed.

China — the world’s second largest economy — currently has 14 nuclear reactors and is building more than two dozen others. It aims to get 15 per cent of its power from renewable sources by 2020.

According to the World Nuclear Association, it aims to increase nuclear power capacity to 80 gigawatts by 2020 from 10.8 gigawatts in 2010.

The fourth-generation reactor, located just outside Beijing, has a capacity of just 20 megawatts. Other recently launched nuclear reactors in China had a capacity of more than one gigawatt, or 1,000 megawatts.

The latest technological step comes after China succeeded in reprocessing spent nuclear fuel in an experimental reactor in the northwestern province of Gansu in January.

Authorities said this would help extend the lifespan of proven uranium deposits to 3,000 years from the current forecast of 50-70 years.

Beijing has also pledged to improve emergency procedures and construction standards at its nuclear power plants, after Japan’s devastating earthquake and ensuing.

China is the eighth country in the world to successfully test a fast reactor and use it to produce power, following the United States, Russia, France, Britain, Germany, Japan and India.

Unlike a traditional nuclear power plant, a fast reactor is more efficient in using uranium and minimizing nuclear waste.

Moreover, a fast reactor can more completely burn or transmute nuclei and shorten the period of radioactive decay to less than 400 years, which makes it easier to dispose of waste.

“The commercialization of fast reactors, together with a closed nuclear fuel cycle, will ease the shortage of uranium resources,” Xu said.

The first fast reactor in the world went into operation in the US in 1946. Altogether, 18 fast reactors have been built around the globe, and the 600-megawatt one in Russia ran for three decades as a major power provider.

Xu said no nuclear accidents among the world’s fast reactors had been reported since 1960, and the biggest threat with a fast reactor is an industrial accident such as a sodium fire and sodium-water reaction, which “could be managed in an average sodium production factory”.

China started fundamental research on fast reactors in 1965, began designing them in 1990 and completed the construction of this experimental one by 2007.

According to Xu, scientists are designing a larger one – a 1,000-megawatt fast reactor with construction scheduled to start in 2017 and operation to begin in 2023.