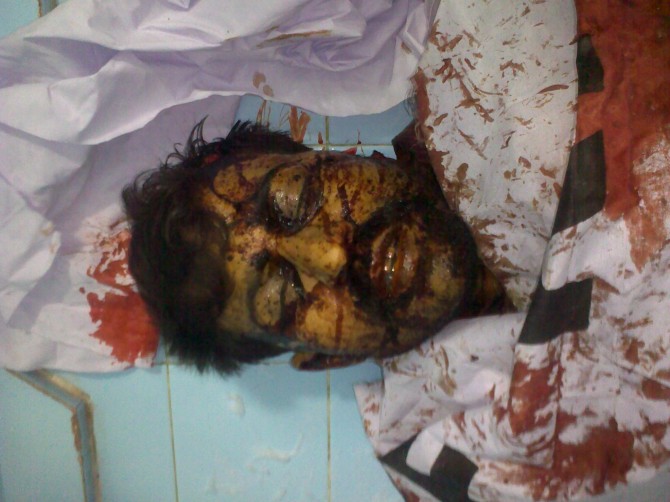 JNN 16 Aug 2011 :  Target Killing of Shia men has claimed two more lives  of  Young Shia Men, One in Orangi Town , Karachi , while other in the Quetta , Md. Asif Ali s/o Md. Bashir Ali , 32 embraced Martydom , when he was targeted and fired in the Limits of Orangi Town , Karachi, while Mehar dad Ali son of Yawar Ali ,24 was also Targeted when he was passing on his bike from , A 1 City Road , Quetta.

As per the details , Asif Ali who owned the Barber Shop, at the Main Road of No 11 ½ Orangi Town, was at his shop , named as Asif Beauty Salon , with his Assistant, at about 8.45p.m , 4 Assailants , came on two Motorcycles , of whom two came in the shop , with weapons in their hands , while the other two remained on their bikes out of the shop , on the guard , as the two Assasins entered the shop , they pushed Asif against the wall and both fired about 4 rounds from a close range aiming his face and head , due to which he was critically injured . The assailants after the crime fled swiftly unhindered with their partners in crime awaiting for them out of the shop.

He was shifted to the Abbasi Shaheed Hospital, but due to the critical nature of wounds , he could not scumb to his Injuries inflicted  by the firing , and he was pronounced dead on Arrival.

His Funeral Prayers was offered after Namaz e Maghribain at the Imambargah e Shah e Najaf , Rizvia Society,Karachi , in the presence of Hundreds of friends , family members and the residents of the area , after his funeral Prayers his body was taken for burial at the Wadi e Hussain Graveyard , Super Highway , Karachi, where his burial was performed .

As per our correspondent , It was the second attack on his lIfe ,as even once earlier in 2001 he was also targeted by the notorious terrorists of Lashkar e Jhangvi Naseem Hayder & Md. Ali who was also his Neighbor too , and Naseem is already in Police custody and has even confessed of his involvement in several sectarian target Killings with his gang members , In the previous attack he had survived multiple bullets , as a result of which he had even fractured his leg , and had to be hospitalized , for which he has to be on bed for several months.

He was married and had left behind 2 sons and a daughter in the heirs. While he had 7 brothers and a sister also. He was a true lover of Azadari & in this regard was also a the member of Anjuman e Malangan e Haideri a Matami Anjuman,

The area members and specially the members of the Shia community has deeply condemned the Target Killing , and have demanded and immediate action against the culprits of the Banned Terrorist Organisation, which are operating from the Two area Mosques , namely Masjid e Farooq e Azam , and Masjid e Siddiq e Akbar , as per the residents of the area , the area around these mosques is a no go area , for common citizens and even LEA’s personnel restrain from going in this area. And the Terrorists have made pickets in the area and also guard the area 24×7 from the roof tops . due to which the adjoining area has become the terrorists den ,for the terrorists of banned Organizations like Sipah e Sahaba Pakistan , Lashkar e Jhangvi, Tehrik e Taliban Pakistan, and Jundullah ,  and the clear Proof of this is the continous Target Killing of the Shia Men of the same area, as this is the  7th Murder being committed in the last 8 months , and still the LEA’s are unable to take any concrete steps to stop this menace. Or rather

Same day another Shia Young man of Quetta was also also targeted and killed, as per the details Mehar Dad Ali was passing on his bike from , A 1 City Road , Quetta, when the terrorists of the Banned Organisation intercepted him and tried to snatch his Motorbike from him , which Mehar resisted  , upon which the terrorist fired multiple rounds and due to which he sustained critical wounds on his chest and could not scumb to his wounds and died on the spot.

He was a Married Just a couple of months back ,and have left behind a widow .

His funeral Prayer was offered at a local Imambargah , and He was buried at a Local Hazara Community Graveyard of Quetta .

Karachi and Quetta has been badly effected by the ongoing target Killing of Shia Men , but still the government has not taken any serious precautions for prevention of such Killing and even the terrorist of Banned Organization like SSP , TTP , LeJ and Jundullah are roaming freely , and killing the Innocent Peace loving Members of Shia community, which is creating a deep unrest in the ranks of the community , as first of all the terrorist of the Shia genocide are not being apprehended , and if even they are apprehended , due to malignly framing charges with loopholes and weak Prosecution , and due to Big loopholes in our Judicial System , they are being freed from the courts , having License to Kill again.

8 thoughts on “2 Young Shia Men embraced Martyrdom , by the Target Killing of LeJ , and SSP Terrorist in Karachi & Quetta”