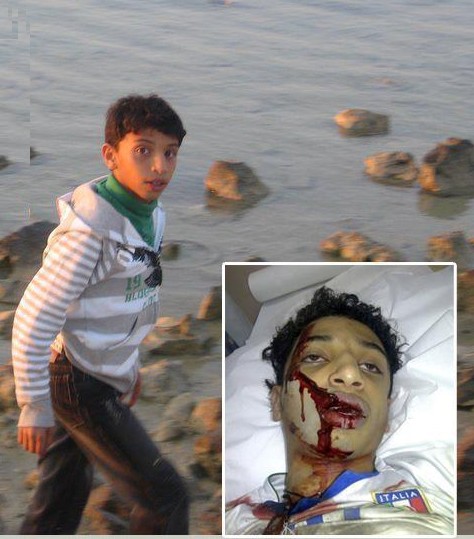 JNN 31 Aug 2011 Sitra : A young Shia Boy Ali Jawad al Shiekh,14  embraced Martyrdom when he was Protesting Peacefully against the Saudi Patronized Zionist Agent King Hamad Al Khalifa , and the Riot Police fired aiming at him , due to which he sustained fatal injury. And Later he was Pronounced dead in the Hospital.

The Bahrain Youth Society for Human Rights cited witnesses as saying the boy martyred after being hit by a tear gas canister fired from a very close range about 5m , aiming and intentionally try to Injure and Kill the Protesting Young Shia Boy , to show heavy headedness of the administration towards the Peaceful Protestors for their Legitimate Rights.

Nabeel Rajab, the president of the Bahrain Center for Human Rights, said in a message in Arabic that a video showing the boy’s body was “a gift to the people” from the government during Id al-Fitr, the Islamic festival marking the end of the holy month of Ramadan.

Bahraini officials confirmed a 15-year-old lost his life but gave no other details on the possible cause of death. A statement by the Interior Ministry said there was no reported police action in Sitra at the time the boy’s death was reported

The Situation in Bahrain is a Clear Picture of the Biased attitude of the Organization like United Nation UN , Organization of Islamic Countries OIC, and other similar Organization, which are Just working on the agendas dictated by the Zionist controlled US and European Union, which can see no Human Rights Violation in Bahrain , Rather who have been Bombing Libya , Iraq , Afghanistan , Just for their own Interests to control their energy resources, while on the other hand they save guard the Monarchies like Bahrain, Saudi Arabia and other Dictatorships , which serves their Interests and Benefits them economically .