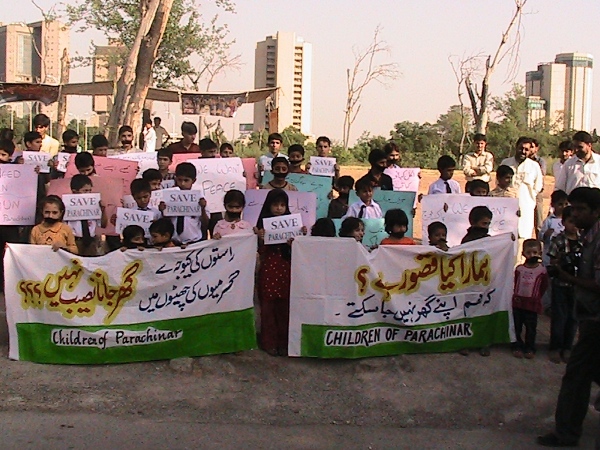 JNN 15 Sept 2011 Parachanar : The Biased Attitude of The government of Pakistan against the Peaceful and Innocent Shia Citizen of Parachanar , who are already Besieged for the last 4 years ,  is once again surfaced as the Political Authorities have arrested the Journalists and Activisits Of Youth of Parachinar (YoP) On Tuesday , while a Press conference was being held to condemn the Firing of the Political Authorities on the Protesting Shia Students .

According the details A protest was launched and rally was taken out in Parachanar by the Youth of Parachanar to condemn the 4 years long Siege of the Parachanar , By the Taliban of the area  , who have taken the control of the Some part of the Thal – Parachanar Road , due to which , it is not possible for the residents of Parachanar to safely travel to Pesahawar and rest of the country , as they were demanding a real Army action against the Terrorist of Tehrik e Taliban Pakistan, and also the revival of the Helicopter service from and to Parachanar , so the residents can safely travel from and to their Home . But Instead of listening to their demands , or putting ear to their Legitimate right of free movement , within the country , these Protester were fired straight by the Frontier constabulary men as ordered by the Political administration of Kurrum Agency. On which a press conference was arranged By the Youth of Parachanar , which was again raided by the Political Administration of Kurrum Agency and the Journalist covering the Press conference and the Participants were arrested instead.

While the Most Noticeable thing in this Criminal Act of Politcal Administration of Kurrum Agency Is the Criminal Silence and a total Black Out of the Zionist Controlled Pakistani and International Media , who have not even reported the arrest of the Peaceful Shia Youth of Parachanar , who were just using their constitutional right of Freedom of Speech by arranging a Press Conference against the Biased , ruthless Administration who’s firing have injured 3 Shia Protesters, and above all the Local Media who claims to pay any price for the freedom of Media, have not reported the arrest of their Professional Colleagues even , who should have instead Protested over the Biased attitude of the Political Administration of the Kurrum Agency. But that rather shows their Loyalty to their Zionist Masters.