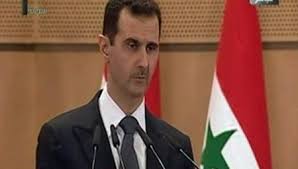 On Sunday, Assad said foreigners are seeking to “make Syria pay the price for its stance and defiance of the foreign plots in the region,” Syrian Arab News Agency (SANA) reported.
The Syrian president made the remarks during a meeting with a delegation of the Bolivarian Alliance for the Americas (ALBA) in Damascus.

Venezuelan Foreign Minister Nicolas Maduro and his Cuban counterpart Bruno Rodriguez as well as the deputy foreign ministers of Ecuador, Bolivia, and Nicaragua voiced support for the Syrian government in a press conference in the Syrian capital on Sunday.

Assad said the foreign attacks on Syria “got more fierce as soon as the internal situation started to get better.”

“Despite this, the reform process will be proceeding and it is being carried out based on a sovereign decision independent of any foreign dictates from whatever side,” Assad added.

He also expressed great appreciation for the stance taken by the ALBA countries regarding the developments in Syria.

Syria has been the scene of political unrest since mid-March with demonstrations being held both against and in support of Assad.

Assad blames “saboteurs” for trying to exploit the movement seeking legitimate reforms in the country, saying armed terrorist groups are responsible for the killing of hundreds of people, including security forces, during clashes since the beginning of the unrest.

Last week, Russia and China vetoed a US-led draft resolution proposed at the UN Security Council (UNSC) that threatened sanctions against Syria over an alleged crackdown on protesters inside the country.

CHINA DISCOURAGES MEDDLING OF US & EU IN SYRIA

AT LEAST FIVE PEOPLE KILLED BY ARMED GROUPS ACROSS SYRIA

DETAINED TERRORIST CONFESSES THE PLAN FOR INSURGENCY IN SYRIA

SYRIA PAYS PRICE FOR SAYING NO TO ISRAEL, U.S