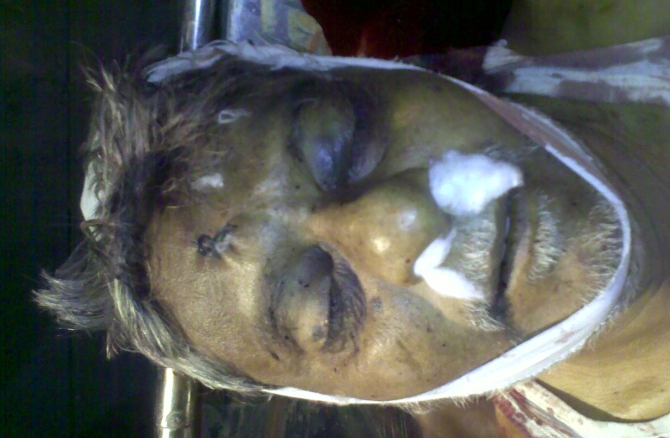 JNN 26th Nov 2011 Karachi : Another Shia Man Ghulam Hassan s/o Mehr Deen , 58 was Martyred in the Broad day light , around 2.00p.m , by the terrorist of Sipah e Sahaba on Friday 25th Nov 2011 , in the Limits of Nazimabad P.S , near Husainia Sajjadia ImamBargah.

According to the details ,Ghulam Hassan was the owner of Bismillah Furnishers , situated near Hussainia Sajjadia , in the limits of Mujahid Colony, which is adjacent to Zia uddin Hospital, and  As his routine he went to offer Zuhrain Prayer at Imambargah Hussainia Sajjadia , and on his return to his showroom  he had his lunch and after lunch , to rest for a while he tried to stretch his legs and tried to took a nap, at the same time two young men , came on Motorcycle and entered his  showroom , while one of them took out his weapon and fired two shots , at point blank range , one of it went through his fore head , while the other  hit  his shoulder , due to which he was critically injured , at that time as no one was at the showroom except him , so both the terrorist went away unhindered , after committing the heinous crime .

His was shifted immediately to Abbasi Shaheed Hospital , But as the Bullet wound at the fore head was fatal so he was pronounced dead on arrival at the hospital . From where his body was shifted to Imam Bargah Shuhuda e Karbala , Sadaat Colony , Federal B Area .

His funeral Prayers was offered on 26th Nov , 2011 , after Zuhrain Prayers, and after the funeral Prayers , his body was taken for the burial at the Wadi e Hussain Grave yard , Super Highway , where his burial was performed.

According to the details Ghulam Hassan was a retired Air force Chief Technician , and after taking retirement from the Air force , for the last 12 Years he was engaged in the business of Furniture , and had a Furniture Showroom , Near Imambargah Hussainia Sajjadia, with the name of Bismillah Furniture, while as it was a family business the Workshop in which the furniture was made was also owned by him and was looked after by his sons and other family members, He was a Pious Man, and was not involved in any type of Political or Social activities or had any Personal enemity , accept Religious activities , of Azadari and Praying  5 times a day , at Hussainia Sajjadia .

He has left behind 4 sons and 3 Daughters, out which 3 Sons and 1 Daughter are unmarried and the youngest of the siblings is 8 years old son. As even at this senior age he was a hard working Man and  the bread earner of his family and was the supporting not only his own family, but other families also.

The Establishment of Pakistan has closed their eyes to the continuous target Killing of Shia Community members from Parachinar to Karachi , in all the length and breadth of Pakistan, for the last 35 years rather have not have only supported but have played  a vital role in the creation of  the banned terrorist organizations , while  the shia community is being targeted by the terrorists as well as the establishment of Pakistan , which is a very dangerous scenario , as the Peaceful and Innocent Shia professionals are being Killed , on the other hand the Shia youth are being implicated in false cases and now they are being even killed in fake encounter be the LEA members, if this Kashmir like scenario is not being checked in Pakistan , then there is no doubt the Black sheeps in the establishments are trying to Push the Most Loyal and Patriotic Pakistani Shia community members against the wall , which will lead the Pakistan into a another disaster like Bangladesh, where one community was pushed against the wall , due to the conspiracy of the Establishment.