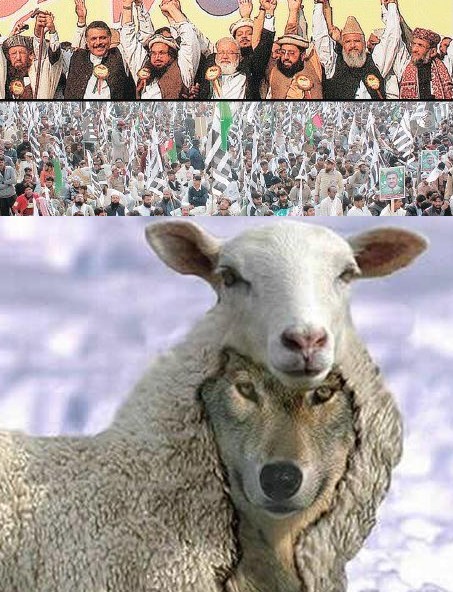 JNN 31 Jan 2012 : The Program done under the name of Defence of Pakistan in Multan , which was organized and was hosted by the Banned Organisation Sipah e Sahaba Pakistan , ( Also know as Ahle Sunnat Wal Jammat )  , gives a clear indication , that these Terrorist Banned Organisations , are working not only under the Patronage of Punjab Government of Muslim League ( Nawaz) , but they once again they have the Blessing of Military Estabilishment of Pakistan, as they have even created them in the past.

These Terrorist Organisation are not only involved in the Killing of the Shia Community of Pakistan , but are also involved in the terrorist attacks against the the Millitary Installations , Personnels, Shia Religious Places and assemblies, which include the attack on GHQ,Rawal Pindi, Attack on Mehran base , Karachi, Attack on Parade Lane Mosque, Several Suicide attacks on Shia Processions and Imambargahs

The Real face of the Defence of Pakistan Program was uncovered when the Notorious Terrorist , and Killer of Dozens of Shia Men , was called on the stage , and as he walked towards the stage the supporters of Banned SSP , LeJ , and Jammat ut Dawwa , were chanting slogans against Iran , and were also chanting Slogans and calling Shias as Infidels. And no one from the stage resisted it , which clearly show and proves their approval and involvement in the Shia Killing , while as this Defence of Pakistan Council is sponsored by the ISI of Pakistan, so that clearly indicates  , why there is an upsurge in the Shia Target Killing , as the Terrorist and the enemies of Shia Community have , once again Joined Hands with the Pakistani establishment , and therefore they are whole hearted , working on their plans of Terrorism, and are involved in the target Killing of Shia Community Members to make feel their presence and strength ,which has given rise in the target Killing of Shia and Barelvi sects members in Karachi.

Participants of the Congregession includes , Retired DG ISI Hameed Gul , ( the Creator of Talibaan ) , Maulana Sami ul Haq , ( Head of JUI –Sami ul Haq Group ) , The Head of Jamia Haqania ( where the The Talibaan Leader Like Mullah Omar and Jalal uddin Haqani were taught the Philosophy of Sectarianism and Hatred against the Shia Sect , Run under the funds of Saudi Arabia ,to contraband & contain the Irani Revolution , So the Saudi Kings can rule the Islamic world ) , Ijaz ul Haq ( Son of Zia Ul Haq the founder of Talibanisation ) , Molana Munawar Hassan ( Head of Jamaat e Islami ) , Ahmed Ludhianvi ( Head of Sipah e Sahaba Pakistan ) , and Malik Ishaq ( Founder of Lashkar e Jhangvi ).

Defence of Pakistan Council is Just a cover up for all the time tested Morally corrupt , Molvi’s of Pakistan, who have been on the Pay list of ISI, for a long time , now they are being again Re Organised , so that they can once again start fresh recruitment for their Jihadi Organisation, under the Patronage of ISI , and can train a bunch of Fresh Lot of Terrorist in the Name of Jihadis , with the same Philosophy of , Hatred , Sectarainism , and to Kill Shia & Barelvi , Ahmadi, Christians and even Chinese People in the name of Islam.

The ISI Patronized Defence of Pakistan Council , is to re collect all the Jihadi Sectarian Groups back again on their Pay role , to get a good share in the future Government of Afghanistan, as the same tactics , was being played by the CIA, and the number of these terrorist Organisations were on the Direct Pay roll of CIA, who were working , in direct command of CIA, and therefore ISI was losing its grip on the Internal Matters and Government decisions of Afghanistan.

And Now as US has taken a decision to withdraw from Afghanistan , as now it can no more afford to pay the cost of showing its presence in Afghanistan , the Bid process is open , for these Jihadi Pro Taliban Organisations from ISI and CIA,

And in the wake of this scenario , the Jihadi Culture and the related terrorist Organisations have once again making their presence and Might proven in the Metropolis areas of Pakistan, and due to which , Once again the Shia Target Killing have intensified.

But if this scenario is not contradicted ,and the Shia and the Some sections of the Barelvi sect members are Pushed against the Wall , then it will give rise to the same scenario of 1971, in which the same Military Establishment was Involved in a Dirty game of Politics and gave rise to ethnicity , but finally it led to the fall of East Paksitan , and creation of Bangladesh, as its creation was Not a victory of RAW , but it was the Dirty Politics of the Pakistani Establishment.