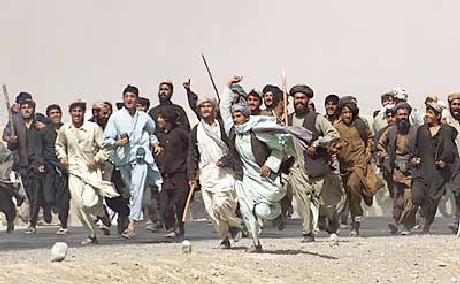 JNN 02 Feb 2012 Kabul : The Taliban are set to retake control of Afghanistan after NATO-led forces withdraw from the country, according to reports citing a classified assessment by U.S. forces.

The Times described the report as secret and “highly classified”, saying it was put together last month by the U.S. military at Bagram air base in Afghanistan for top NATO officers. The BBC also carried a report on the leaked document.

“Many Afghans are already bracing themselves for an eventual return of the Taliban,” the report was quoted as saying. “Once ISAF (NATO-led forces) is no longer a factor, Taliban consider their victory inevitable.”

The document stated that Pakistan’s security agency was helping the Taliban in directing attacks against foreign forces – a charge long denied by Islamabad.

The findings were based on interrogations of more than 4,000 Taliban and Al-Qaeda detainees, the Times said, adding the document was scarce on identifying individual insurgents.

A U.S. state department spokesman and Britain’s Foreign Office both declined comment on the report. NATO and Pakistani officials could not be immediately reached for comment.

Despite the presence of more than 100,000 foreign troops, the UN has said violence in Afghanistan is at its worst since the Taliban were ousted by U.S.-backed forces in 2001.

Citing the same report, the BBC reported on its website that Pakistan and its Inter-Services Intelligence (ISI) agency knew the locations of senior Taliban leaders and supported the expulsion of “foreign invaders from Afghanistan”.

“Senior Taliban leaders meet regularly with ISI personnel, who advise on strategy and relay any pertinent concerns of the government of Pakistan.”

The Times said the document suggested the Taliban were gaining in popularity, partly because the severe Islamist movement was becoming more tolerant.

The report was quoted as stating: “It remains to be seen whether a revitalized, more progressive Taliban will endure if they continue to gain power and popularity. Regardless, at least within the Taliban the refurbished image is already having a positive effect on morale.”