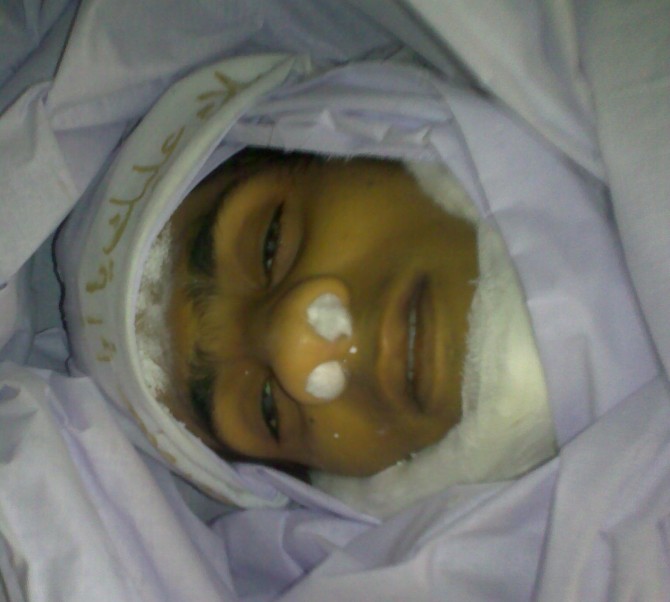 JNN 16 Mar 2012 Karachi : In the late hours of 15th Mar 2012 at around 11.45p.m, A Young Shia Man S.Akmal Mohsin Rizvi S/o Mohsin Rizvi,18  and His Father , Mohsin Rizvi , who is a office Bearer of  Jaferia Alliance Pakistan  were Targeted and shot at Patel Para , Near Lasbella Bridge, Karachi. Due to which  Akmal embraced Martyrdom, while Mohsin is in ICU, and is being treated for his bullet wounds , and is now in stable condition , out of danger, and in the recovery process.

According to the details , the Son and the Father , were the Trustee of the Imambargah in Ali Basti , Adjacent Golimar, which is their Family Imambargah, and were active in the Promulgation of Azadari, and Prayers, and it was due to which , they were at the Imambargah at Shab e Juma Prayers and Azadari, and after winding up the Prayers, they were proceeding towards their home at about 11.45p.m , and as they entered the Patel Para area , they were being followed and Near the Bata Shop in Patel Para, at the speed Breaker , as they got slow, the Assilants , which were following them at their tale , who were riding Motorcycle , started firing at them , from the Back and Left side of the car, with a 9mm Pistols , and they fired about 7 rounds , 3 of them  hit Akmal , while 3 of them hit Mohsin , due to which Akmal Fell on Mohsin , who was driving the car, as Mohsin felt of danger He sped away , and the assailants , never followed him , Instead they mingled up in the crowd and rushed up in one of the lanes, with out any hindrance or any resistance from any LEA of Public, as it is quite busy area even in the late hours of the night.

Mohsin was critically  injured but to save his son’s life , drove the car and finally made to the Hospital, where both were taken care off, But even after doing every thing he could not save the life of his son, as he was fatally injured by the Bullet wounds , caused by the firing of SSP terrorists, while Mohsin was operated , as he has 3 Bullet Injuries, and which is out of danger now.

The Body of Akmal was then shifted to Imambargah e Shuhuda e Karbala, Rizvia Society, where it was made ready for the Funeral, And then from there it was shifted to Masjid e Noor e Emaan, Nazimabad, where his Funeral Prayer was offered after Namaz e Juma ,  Maluana Razi Jaffar led the funeral Prayers, in the presence of Thousands of Mourners , and No. of Shia Scholars and Leaders, which includes the Names of Allama Abbas Kumaili  (JAP), Mirza Yousuf Husain (SAC) , Maulana Hussain Masoodi , Allama Furqan Haider Abidi, Allama Zuhair Haider Abidi , Shabbar Raza, and others. The body was taken in a funeral Procession, for the burial at the Wadi e Hussain Grave Yard , Super High way,Karachi.

It should be noted that , at around the same place another activist of JAP , Asif was also targeted , and fired, who also received multiple Bullet wounds, but fortunately sped away and drove to the Hospital , where he was taken care of his wounds , and by the grace of God , he has recovered a lot , and now in a stable condition.

As it is known fact that Patel Para is a Pashtun  Majority area , and is being dominated by SSP elements , now working mostly ,in collaboration with  ANP, and these elements also trying to influence Gul Bahar , and other adjoining areas , and it should also be noted , that no operation clean up , is being done in these areas , where known attacks and target Killing is being carried away, and the terrorist of SSP are actively and openly , working and carrying out there nefarious activities , unhindered and even the Residents are supporting them , due to fear of their terror activities, where they are Promulgating  the culture of Hatred freely, and which is cancer for the society.

Pakistan already facing , Balochistan freedom Movement, and now there are echos , being heard about , Sindho desh liberation Movement , and if these terrorist activities are not being checked for any reason , but they ll definitely lead to another disaster, as Pakistan has already , seen the debacle of Bangladesh.

The Patriotic Shia Population of Pakistan , who have given their Flesh & Blood , for the Independence of Pakistan, and till now , since the creation, is still fighting , and giving its Blood to weed out terrorism , from the country, Is standing In the way of every enemy of Pakistan.

7 thoughts on “JAP Activist and his Son Targeted , Son embraced Martyrdom ,while father injured by the terrorists of SSP”