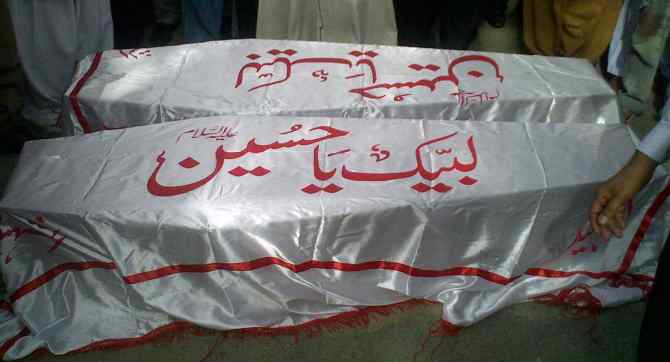 JNN 21 April 2012 Quetta : Targeted killings of Shia Hazara community in the provincial capital continued as two more persons were embraced Martyrdom in the ongoing  on Brewery Road in Quetta on Saturday.

However, Frontier Corps (FC) claimed to have arrested three suspects allegedly involved in the Brewery Road incident and seized arms from their possession.

According to a police officials, two persons were passing on a motorbike on the Brewery road when Terrorist of  Tehrik e Taliban opened fire at them, killing them instantly. They said that the  attackers had managed to escape from the scene after committing the crime.

He said it was the case of sectarian target killing and investigations were underway.

A heavy contingent of police and security forces reached the spot and shifted the bodies to Bolan Medical Complex where the deceased were identified as Boban Ali and Hussain Ali, residents  of Hazara Town.

“The victims were shot in the head and chest,” hospital sources said.

Scores of angry people belonging to Hazara community staged a noisy demonstration on Brewery Road near the hospital. They blocked the road by torching used tires. Protesters raised slogans against the government and law enforcement agencies for their failure to protect the Hazara community from target killers.

Meanwhile, a spokesperson of Frontier Corps (FC) confirmed that the killers of two Hazaras on Brewery Road had been apprehended as FC personnel deputed on the road chased down the criminals who even opened fire at them. “The attackers after targeting two persons of Hazara community tried to escape from the scene. Security forces chased the killers with the help of local people,” he stated in his official press release.

The statement detailed that the FC had first arrested two suspects identified as Guharam Soori Khan and Mian Khan and later booked a third  suspect following disclosure from his colleagues during interrogation.

The arrested suspects were handed over to Brewery police for further interrogation, the FC official said, adding that people present on the spot had also identified the target killers arrested by FC.

Inspector General FC Balochistan Major General Ubaidullah Khan praised the FC and police for acting against the killers on time. “The perpetrators will not escape if local people continue to cooperate with law enforcement agencies,” he said while announcing the arrest of killers.