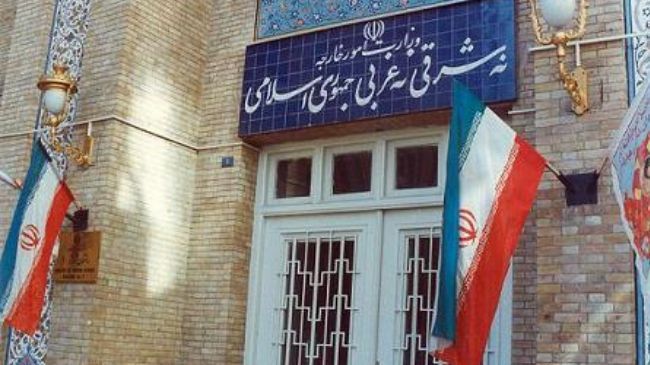 JNN 18 May 2012 Tehran : Iranian Foreign Ministry has summoned Bahrain’s charge d’affaires in Tehran to express the Islamic Republic’s growing concerns over the developments in the Persian Gulf sheikdom.

In a Thursday meeting with the Bahraini diplomat, the head of the Iranian Foreign Ministry’s Second Office for Persian Gulf Affairs said meeting public demands is the only way out of the crisis in Bahrain.

Bahrainis have been staging demonstrations since mid-February 2011. The protests were first aimed at implementing political reforms and establishing a constitutional monarchy in the sheikdom, but later changed to an outright call for the ouster of the ruling Al Khalifa family following the regime’s deadly crackdown on popular protests.

According to local sources, scores of people have been killed and hundreds others arrested so far during the Bahraini government’s clampdown on February 2011-present anti-regime demonstrations on the island. The Bahraini public hold King Hamad bin Isa Al Khalifa responsible for deaths of protesters during the popular uprising.

Earlier in the day, Sheikh Khaled warned Iran to stop interfering in Bahrain’s internal affairs, while affirming Manama’s support for plans about the formation of a union between the six nations of the [Persian] Gulf Cooperation Council ([P]GCC). “The union…is a demand by the people of the [P]GCC,” he said.

The Saudi plan would give Manama internal political autonomy, while Riyadh would stay in charge of the country’s military affairs.

On Wednesday, Iran’s Judiciary Chief Ayatollah Sadeq Amoli Larijani warned that the merger plan, which, he said, has been devised by the West and the Saudi regime, is a “dangerous game.”

The main Bahraini opposition group, al-Wefaq, has censured a Saudi proposal to create a closer union between Riyadh and Manama.

The group said in a statement issued on Wednesday that no country has the right to undermine Bahrain’s sovereignty and independence.

Saudi Arabia is seeking to initially create a closer union with Bahrain in line with plans to unify the six Arab member states of the [Persian] Gulf Cooperation Council.

In December 2011, Saudi King Abdullah called on the council members to move “beyond the stage of cooperation and into the stage of unity in a single entity.”

Although the exact nature of such union among the six Arab countries is unclear, reports say the Saudi unity proposal calls for economic, political and military coordination and a new decision-making body based in Riyadh to replace the bloc’s current secretariat.

Bahraini Information Minister Samira Rajab said on May 12 the idea could follow the “European Union model.”

The Bahraini opposition group also stated on Wednesday that the Saudi proposal could lead to “sectarian strife.”

In addition, al-Wefaq leader Sheikh Ali Salman has called for a referendum on the issue to be held in all the six Arab countries.

“Bahrain gained its independence (in 1971) following a referendum” overseen by the United Nations, Salman said in a speech on May 13.

Salman added that the people of Bahrain “alone have the right” to decide and the ruling Al Khalifa regime has “no right to decide a union or confederation with any country.”

On May 14, the [Persian] Gulf Cooperation Council postponed talks on the union of the six countries until its next meeting scheduled to be held in Bahrain in December.

Saudi Foreign Minister Saud al-Faisal said after the May 14 meeting in Riyadh that the decision to postpone the talks on the issue aimed to “bring all the members and not only two,” referring to Bahrain and Saudi Arabia.

“There was no step to have a special relationship between Bahrain and Saudi Arabia, although both countries would welcome closer association. We are in full cooperation with all [Persian] Gulf states to come up with the union.”

Some members of the council have expressed concern about Saudi Arabia’s possible dominance over the other five countries if the council becomes unified.

A Qatari official, whose name was not mentioned in the news reports, said on May 11 that Doha “sees this all as Saudi’s way of undermining the [Persian] Gulf States bilateral relations and forcing its own agenda.”