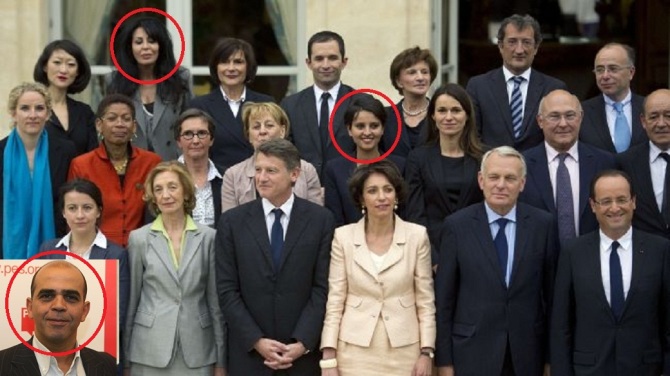 Of the 34 ministers in Hollande’s government, three are Muslims. They include Najat Vallaud-Belkacem, Yamina Benguigui and Kader Arif.

Morocco born Belkacem, 34, has been appointed as the minister for women’s rights, a position long missing from the French government.

Najat Vallaud-Belkacem was born in the Moroccan countryside in 1977 in Bni Chiker, a village near Nador. In 1982 she rejoined her father, a French building worker, with her mother and elder sister Fatiha, and grew up in the suburbs of Amiens.[1] She graduated from the Institut d’études politiques de Paris (“Paris Institute of Political Studies”) in 2002. At the Institutshe met Boris Vallaud, whom she married on 27 August 2005.[2]

She joined the Socialist Party in 2002 and joined the team of Gérard Collomb, Senator/Mayor of Lyon, in 2003 leading actions to strengthen local democracy, the fight against discrimination, promotion of citizen rights, and access to employment and housing.

Elected to the Regional Council of Rhone-Alpes in 2004, she presides over the Culture Commission. In 2005, she became adviser to the Socialist Party. In 2005 and 2006 she was a columnist for the cultural programme C’est tout vu on Télé Lyon Municipale alongside Stéphane Cayrol.

In February 2007 she joined Ségolène Royal’s campaign team as a spokesperson, alongside Vincent Peillon and Arnaud Montebourg.

In March 2008 she was elected Conseillère Générale for Rhône in the cantonal elections with 58.52% of the votes in the second round.

The second Muslim Minister, Yamina Benguigui, Junior Minister for French Nationals Abroad is a French-Algerian film director. She is known for her films on gender issues in the North African immigrant community in France

Benguigui’s parents were Kabyle and immigrated to France from Algeria in the early 1950s. She never discovered why her parents decided to leave Algeria, saying the subject was considered taboo .Born in Lille, Benguigui was the eldest daughter of six children and spent her childhood in northern France Describing herself as a quiet child who grew up in the Islamic tradition, Benguigui was only 13 years old when she first decided to become a filmmaker.

Her father was a political leader in the Algerian National Movement, and was jailed in France for three years as a political prisoner (she has also stated that he was jailed on two separate occasions, and that her whole family was once under house arrest).  Because he did not support her in her chosen profession, Benguigui broke off contact with him early on, only to reconnect with him in late 2001. After she left the family her mother divorced her father as well. Yamina Benguigui married a Jewish pied-noir and has two daughters.

The third Muslim minister is Kader Arif, the Junior Minister for Veterans who has been vocal in blaming Israel for French foreign affairs problems, saying Sarkozy’s Mediterranean Union was blocked by Israeli actions in Gaza.

Hollande has appointed Jean-Marc Ayrault, a veteran social democrat and German expert, as his prime minister.

One thought on “Hollande announces French Cabinet with 3 Muslim Ministers”