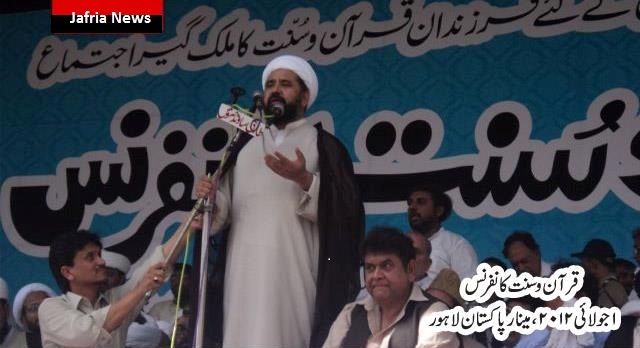 JNN 01 July 2012 Lahore : Today was the day for the shia population of Punjab to show their Unity and strength , as they have once again got a chance to be meeting at Minar e Pakistan ,  the same Place ,after atleast 25 years , now under the Banner of Majlis e Wahdat e Muslimeen’s “ Quran O Sunnat Conference .

6th July 1987 was the day when the Shaheed Qauid Allama Arif Hussain Hussaini , intiated the Process of Shia Awakening in Pakistan , and Addresed to the Masses at Minar e Pakistan , Lahore , and that was the time when , the Community was bickered in Pieces, and under his great Leadership , He made it a Point to take a first step , and to create Harmony and Unity among the Biggest Muslim Community of Pakistan , The Jafria Community , as it was the first step towards , achieving the goals , set by our Imams (Leaders ).

And now after 25years , where a generation have passed , now a New Party Majlis e Wahdat e Muslameen (MWM ) under the Leadership of Raja Nasir Abbas Jafri , which have once again tried to revive the Mission of the Great Pakistani Shia Leader Allama Arif Hussain Hussaini , to create awareness and Unity among the Pakistani Shia Community , to come and Unite under the Flag of Hazrat Abbas a.s , and to show their Political Power , which is a necessity of the time , as there are No. of  Shia Leaders in Different Political Parties of Pakistan , But they can only show their verbal support for the community , but at the time of Practical and Concrete measures , they back out to show their loyalty to their Party Leaders , instead of showing Loyalty their Great Present Imam (Leader) .

As Now after doing , successful Public Meeting in Karachi, Khairpur , Gilgit , Skardu and other cities of Pakistan , today the MWM , had once again , showed a great show of Shia Power and strength in the Provincial Capital ,Lahore. The Biggest Province of Pakistan, which has even the Biggest Shia Population in Pakistan , After Gilgit Baltistan.

Allama Raja Nasir Abbas Jafari told the conference that  Americans have faced defeat in Iran, Iraq, Lebanon and Syria and they will also face the same fate in Pakistan.

‘We will expel the Americans from Pakistan with insult,’ he said, adding that the American embassy and its all diplomatic missions in Pakistan are the centers of conspiracies to destabilize Pakistan.

He said the enemies of Islam and terrorist are launching attacks in Pakistan for the purpose to target members of the Shiite community in this country but Shia Muslims are well aware of the conspiracies.

Speakers criticized the government for its failure to protect Shia Muslims and to apprehend those who are behind the killing of innocent people. They said that all conspiracies against Shia Muslims must be unearthed. They warned that if the government and its law enforcement agencies failed to protect the lives and property of the Shias then they would stage a sit-in outside the Prime Minister’s house.

In the last 30 years , since the rule of Dictator Zia ul Haq , the things have been changed drastically in Pakistan for the Shia Population , as under his rule the Military establishment have nurtured and bred a Jihadi culture , which have the been tought in their basic principles to Hate and Kill Shia Population , around the World, and it was done to please their US CIA Masters , as they were afraid of the Irani Revolution , which was sweeping the Hearts and Minds of the Muslims in special and all other Religions in General , as this was the Biggest Revolutions of the World , in the Present since the Socialist and Communist Revolutions , which were fading and falling down at that time

As the Irani Revolution was brought by the Shia Leadership , so to counter the threat the Wahabism was Propogated , to create difference in the among the Muslims , as the rule was the same to divide and rule, and Plus as the finances were coming from Wahabi Ale Saud Monarchy, as they were afraid of the Irani Revolution , due to their Injustices over their Shia Minority ,and sectarian rule of Law. And as the Saudi Monarchs wanted to become the Leader of the Islamic Block , after the Down fall of the Shah of Iran, who used to be the Leader of the Islamic World , Due to their Might and financial Power .

Coming Back to Pakistan , due to the Wahabi Islam , which is a takfiri sect of Islam , which calls all the others sects of Islam Infidels , who doesn’t agrees with their belief. As these Wahabi Takfiri Group , was nurtured by the Military Establishment of Pakistan , so they were given the License to Kill any body , and every body , who do they seem so , so in the Last about 30 years , there have been a heavy Blood shed of Shia Muslims in Pakistan, they have been victimized, terrorized, Brutally Killed , and have been tortured to death , by these Military establishment Nurtured Wahabi Jihadi Organisations , which have Killed thousands of Shia Men, women and children . And the apathy is this that , due to their backing by the Military establishment and the successive governments backing they were still at large , and Non of them have been Prosecuted , and if some are even arrested and prosecuted , then even they are being released , who have even Publicly claimed that they have Killed Shia Men , but even then the Biased and Corrupt Judiciary has set aside their sentences , and have released them , to Kill more Shia Men.

And the Biggest Mistake , of Pakistani Shia Population was that after the Leadership of Allama Arif Hussain Al Hussaini , they could not create a Leader ship , who can bring the whole Nation , to one Platform , and could do some Policy work to fight this Menace of Wahabi Terrorist Organisations , As if there were some dedicated Shia Men who have the Matter , that they can lead , then the conspirators for their personal benfit , didn’t let them come on the face , while where the Big teams and associations ,were formed , who didn’t have the right leader ship ,to guide them to the success and glory , and the Biggest of all was that the Shia Population , living in their homeland were riding against the wind , as it is the toughest Job , that to work against the establishment .

But now after adding up so many Martyrs , the Masses and even the Notabales have learnt the lesson that they have to come to some Point , to show their strength and Unity, to survive otherwise , the system’s Injustice will crush them up to such a level that the time is not far away that they even have to sacrifice the Religious freedom , what till now they enjoy in Pakistan , even after giving the lives of thousands of their brothers and elders .

As this is the election year in Pakistan now , and this is the time , that MWM , should take all the notables and the Leader of the shia Parties , on board and should strike on the shia Platform , that they should atleast get some sizeable amount of seats in the National and Provincial assemblies , so in the times coming ahead they should have their say , in the National as well as International Matters , as now the Shia sect is recognized Internationally , as the true Picture of Islam , which is the Most tolerant , humble , and consistent with the Nature , and it reflects as the Law of the Nature , and nothing in it is in contradiction to the Nature.