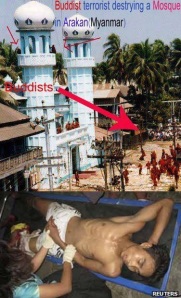 JNN 04 July 2012 Myanmar :  Police in Myanmar have arrested 30 people in connection with the vigilante killing of 10 Muslims that helped spark days of sectarian violence in Rakhine state last month in which at least 80 people were killed and tens of thousands were displaced.

The 30 suspects were in detention and “action is being taken against them according to the laws”, the New Light of Myanmar newspaper said on Monday, referring to the incident on June 3, when the Muslims were hauled off a bus, beaten and killed.

The riots and killings underline the big challenges facing Myanmar’s first civilian government since the end of five decades of authoritarian military rule.

The 15-month-old administration says it wants to forge peace and unity among the many ethnic groups and religions in Myanmar. Northwestern Rakhine state in particular is fraught with longstanding communal tension.

The lynching of the Muslims was apparently retribution for the gang rape and murder of a Buddhist woman six days earlier, an attack they had no connection with.

Three Muslim youths were found guilty of murdering the woman. One committed suicide and the other two were sentenced to death on June 18.

The two incidents and the subsequent riots in Rakhine have drawn attention to the bad blood between ethnic Rakhine Buddhists and hundreds of thousands of Rohingya Muslims. Many of the latter have lived in the state for generations but are not recognized as citizens of Myanmar.

Thousands of Rakhines and Rohingyas fled the violence. Some of the Rohingyas, who are Muslims of South Asian descent, tried to escape by boat to neighboring Bangladesh, but most were turned away. Bangladesh also refuses to recognize them as citizens.

Buddhist residents in western Myanmar have killed at least nine Muslims as sectarian tension worsens in the region, police say.

Reports say a crowd attacked a bus in Rakhine province after blaming some of the passengers for the gang rape and murder of a Buddhist woman.

In another incident, at least 10 people were injured in the state capital Sittwe when police broke up a protest.

It is the worst violence to hit the province in recent months.

Sectarian and ethnic tension persists in the country despite a new, supposedly tolerant climate introduced by the civilian-led government which came into power 15 months ago.

The bus attack took place near the town of Taungup in Rakhine province, which borders Bangladesh, on Sunday evening, police and residents said.

It was thought to be carried out by mostly Buddhist ethnic Rakhine people.

“More than 100 people beat and killed those people,” a resident told AFP news agency. “The residents even torched the bus.”

The reason for the attack is unclear, but some residents say it was a revenge attack following the rape and murder of a Buddhist girl in another part of the province last month.

But the Myanmarese Muslim Association said most of those killed were Muslims visiting a mosque from central Myanmar.

That account was corroborated by unnamed residents quoted by Reuters news agency, who said those killed were not from the area.

No arrests have been made. A police investigation is under way.

In another, apparently unrelated incident at least 10 people were injured after police fired rubber bullets at a mob who attacked their police station in Sittwe, reports said.

A 13-year-old protester was among those injured, witnesses said.

There were contradictory reports about what triggered the protest, but some accounts suggested anti-Muslim sentiment could have played a part.

Rakhine is home to Myanmar’s largest concentration of Muslims, including much-persecuted Rohingya Muslims, and their presence is often deeply resented by the majority Buddhist population.

In a joint statement quoted by Reuters, eight Rohingya rights groups based outside Myanmar condemned the attack on the Muslims on the bus, whom they termed “Muslim pilgrims”.

Although it appears those on the bus were not Rohingyas, the groups said the attack followed months of anti-Rohingya propaganda stirred up by “extremists and xenophobes”.

Forefathers of Myanmar Muslims had landed in Myanmar (Burma’s Ayeyarwady River delta, Tanintharyi coast of Tanintharyi Division and Rakhine) as early as ninth century, roughly about 200 years before King Anawrahta of Bagan or Pagan established the first Myanmar (Burmese) empire in 1055 AD. Muslims arrived in Burma as travelers, adventurers, pioneers, sailors, Military Personals (voluntary and mercenary), and some of them as prisoners of wars. Some take refuge (from wars, Monsoon storms and weather, shipwreck and some for other various unforeseen circumstances). Roots in Burma Myanmar Muslims are descendants of Arabs, Persians, Turks, Moors, Indian-Muslims, Pakistanis, Pathans, Bengalis, Chinese Muslims and Malays intermarried with local Burmese and many ethnic Myanmar groups such as, Rakhine, Shan, Karen, Mon etc.