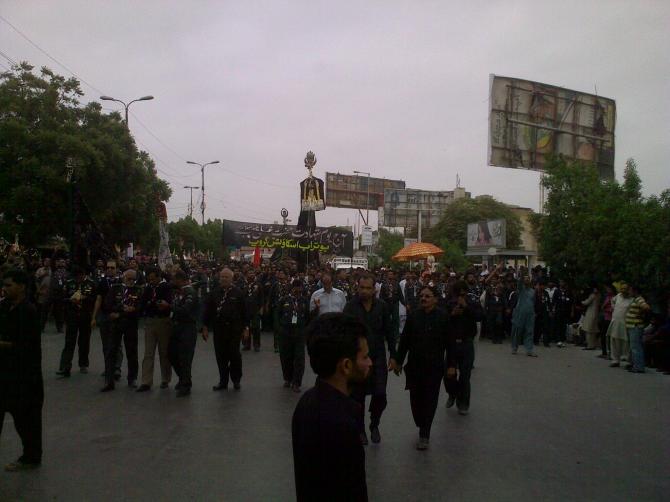 On 21st Ramzan , Muslims around the world , especially the Shia sect observed the Youm e Ali , the Shahdat Anniversary of Hazrat Ali a.s , the First Imam of the Jafria Sect of Islam, As he was Fatally wounded by the Poisonous sword of Abdul Rehman ibn e Muljim L.A ,  in the Mosque of Kufa , while he was offering the Fajr (Morning) Prayers , after which he went under critical Medical care , but as the wound was fatal , so he could not survive , and He embraced Martyrdom on the 21st of Ramazan , Leaving behind all the faithful of Islam in deep Mourning , and since his Martyrdom , till this day , His Martydom Anniversary is commemorated with full religious fervor , and enthusiasm by all the Muslims , and especially the Jafria Sect of Islam.

As in the Present Scenario the Saudi Wahabi nurtured Taliban, and Al Qaida Members are ruining the Islam . To Amass the Public Wealth by Killing and conquering in the Name of Islam, while they are the Worst enemies of Islam.

On this 21st Ramzan even Large Public gatherings and Processions were taken out in commemoration of Shahdat e Hazrat Ali , in different Parts of the World .

In Pakistan ,where a sizeable amount of Shia Muslims are the residents in every nook and corner of the country, as they are the chain that keeps the whole country binding in one against all the ethinic , linguistic and cultural differences .

Hundreds of Majalis , and Processions ,were taken out , from almost whole of the Pakistan.

The Biggest Procession on the Martydom Anniversary of Hazrat Ali a.s in Pakistan , is being taken out from the Biggest city of Pakistan , Karachi .

A Public Meeting was arranged at Nishtar Park , which was addressed by Molana Shehenshah Hussain Naqvi , at around 12.00p.m , after which the Procession was taken out , which moving on its route ,when reached Imam Bargah Ali Raza a.s , On Main Md.Ali Jinnah Road , The participants of the procession offered the zuhrain (Afternoon ) Prayer , as per their Previous Practice .

Hundreds of thousands of Shia Men , women and children were Present at the procession , and some groups  were ,reciting Noha ( Poems written on the Martydom ) , and rest all were beating their chest with bare Hands , and some with Blades and Knives on their back and Head.

The Procesion which is taken out under the supervision of Jafria Alliance Pakistan , was moving swiftly in cooperation with the city administration.

As due to strict Security Measures , all the roads and lanes coming into and going out of the Procession route which is about 8 to 9 Km long , were completely sealed , with No exit and entry Points, But as per agreed exit and entry points at Saddar Dawakhana and Boulton Market , which are  being used by the Shia faithfuls to participate in the Procession , at their convenient timing and Places , But those were also closed by the Rangers Personel.

But later on some exit and entry points were then opened ,as the JAP member received complained from the Shia families and individuals as they cannot reach the Procession, so on intervention of the JAP members , some entry exit points were opened , monitored by the Scouts and volunteers .

The same issue of entry and exit point , arose at the Bolton Market entry Points ,where about 4 – 5 Hundred Mourners ,were trying to enter , but were stopped by the Rangers Personnel , as the complained reached Chacha Waheed , the senior member of the core committee of JAP , he intervened in the matter and took notice of it immediately, and discussed the matter , with the Brigadier Basit  instead of trying to resolve the issue , he in his dictatorial way said , that either he ll do what he deems better , or he ll withdraw his forces at the moment , on which he got the reply , that we are here to give the best service to the Momineen , and not to harras & bother them on the issues , on which the Public who were present at the surrounding  chanted slogans against the dictatorial attitude of the rangers , who were there to serve the Public and not to rule the Masses on the Might of their forces, and the Brigadier who even being in the top Most Position of the forces , And on top of this Brigadier ordered his Men to start aerial firing , to make a clear way out for himself and his men. As aired on the Local and National Media even .

While at the same time the City Police and Administration , step forwarded as all the Rangers Men were with drawn , and the Local Police took to the Positions and provided the much needed security cover to the Huge Youm e Ali Procession, After the incident the Shia youth were infuriated , which was very wisely and calmly handled by the JAP , Procession supervising team . And the Procession carried on and ended safely at the Imambargah Husainia Iranian , well before Iftar , where truck loads of Iftar and Cold Drinks was waiting to serve the faithful to end their fast.

This act of High headedness of the Rangers  have always been condemned by the whole Shia community , and even by all the residents of Karachi. As even in some Previous incidents , like the Incident of 1st Muharram , when to disperse the Peaceful Shia youth Protesting on the Martrydom of two Shia scouts , he even ordered the same and restored to a Huge aerial firing , and his men took positions , as fighting against the enemy , and even fired straight rounds , in which about 7 – 10 shia men were wounded , due to the bullet wounds.

Rest all the Processions taken out on the day of Youm e Ali ended safely , all around the country. With no reports of any untoward incident.

God Bless all the Muslims and especially the Jafria Community which is the worst victim of the Nefarious designs of the Munafiqeen, the worst enemies of Islam.