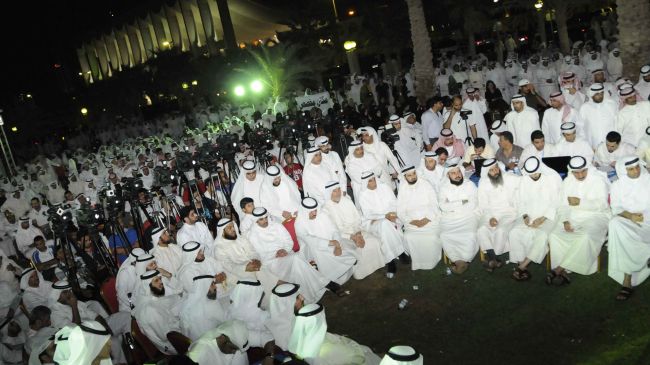 JNN 15 Sept 2012 Kuwait : Over 3,000 demonstrators gathered in Determination Square of Kuwait City opposite the parliament late Monday to protest for More Democratic and Electoral reforms.

The event was organized by an umbrella group of Islamic and youth activists despite a ban by the government.

The protesters also called for more democracy and changes in the country’s electoral law.

About 21 lawmakers from the dissolved parliament also attended the demonstration.

Lawmaker Walid al-Tabtabaie said in an address to the protesters, “We have decided as people that (Prime Minister) Jaber al-Mubarak (al-Sabah) will be the last prime minister” from the ruling family.

Tabtabaie also stated that the ruling family can be “the emirs but the ministers will be from among us.”

The Kuwaiti government has been dominated by the al-Sabah family members without any challenge since the dynasty began ruling the Persian Gulf state about 250 years ago.

“Our problem is with the members of the family who must be kept away from ministerial positions. There must be a law that organizes the work of the ruling family,” said Khaled Shakheer, a former Kuwaiti MP who attended the demonstration.

“I will come to the Determination Square with the people until our demands are met.”