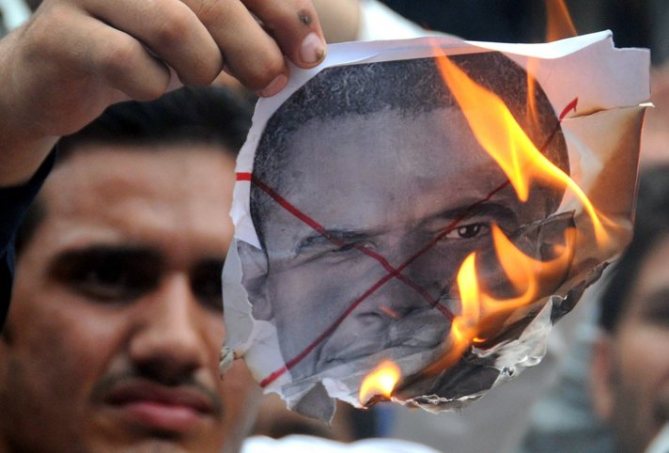 JNN 22 Sept 2012 WASHINGTON: The United States has bought time on Pakistani television stations to run a series of advertisments in a bid to stem Muslim protests at an amateur anti-Islam film, a US official said Wednesday.

The State Department has spent some $70,000 dollars to air the ad in Urdu across seven Pakistani TV channels in a bid to disassociate the US government from the inflammatory film, spokesperson Victoria Nuland said.

“After the video came out there was concern in lots of bodies politic, including in Pakistan, whether this represented the views of the US government,” Nuland told journalists.

“So in order to ensure we reached the largest number of Pakistanis, some 90 million as I understand in this case with these spots, it was the judgment that this was the best way to do it.”

The 30-second ad shows clips of President Barack Obama and Secretary of State Hillary Clinton taken from their speeches made since the violence flared in Muslim nations last week, in which US ambassador to Libya was killed.

It also includes an image of the US seal “to make clear it’s official,” and a notice that they were paid for, although Nuland was uncertain whether the name of the State Department was included.

Pakistan is the only country in the world where the ads are running. The embassy wanted to run the ads because it determined that the messages of Obama and Clinton were not reaching enough of the Pakistani public through regular news reporting, Nuland said.

The aim was “to make sure that the Pakistani people hear the president’s messages and the secretary’s messages,” Nuland said.

Obama is shown saying: “Since our founding the United States has been a nation that respects all faiths. We reject all efforts to denigrate the religious beliefs of others.”

Clinton then says: “Let me state very clearly, the United States has absolutely nothing to do with this video. We absolutely reject its contents. America’s commitment to religious tolerance goes back to the very beginning of our nation.”

Some channels on which the ad appeared, it was followed by a tag reading ‘paid content’.

But it was unclear whether the message was getting across Thursday as thousands of protesters clashed with police close to Islamabad’s diplomatic enclave in chaotic scenes that left at least 50 people injured.

The outrage across the Middle East, North Africa and South Asia was triggered by a crudely-made movie “Innocence of Muslims,” believed to have been produced by US-based extremist Christians.

Protests have erupted in at least 20 countries leading to the deaths of more than 30 people in violence linked to the film.

2 thoughts on “US adamant to Put off air the Blasphemous Movie, instead buying air time on Pakistani channels to halt the Protest”