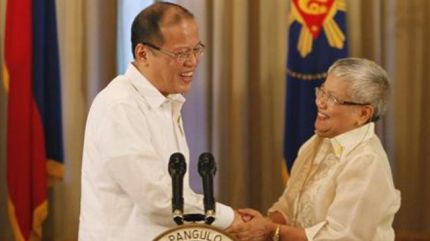 JNN 08 Oct 2012 Manila : The Philippine government and Muslim rebels agreed a deal to end a 40-year conflict that has killed more than 120,000 people, President Benigno Aquino said on Sunday, paving the way for a political and economic revival of the country’s troubled south.

Mindanao local leaders hailed on Sunday, the drafting of a preliminary agreement between the Philippine government and the Moro Islamic Liberation Front for the setting up of a new and more effective Bangsamoro autonomous entity.

President Benigno Aquino III announced the drafting of a framework agreement for a new autonomous region for Mindanao Muslims, which could signal the beginning of the end to over four decades of Moro rebellion on the conflict-ridden region.

“This framework agreement paves the way for a final and enduring peace in Mindanao… It brings all former secessionist groups into the fold. No longer does the Moro Islamic Liberation Front aspire for a separate state,” President Benigno Aquino said in a nationally televised address on Sunday.

According to the peace agreement, the Philippines’ government will establish an autonomous region in the Mindanao which is the second largest and easternmost island in the country to be controlled by Muslims.

Reports say that the peace agreement is set to be signed on October 15 in the capital city of Manila.

This developed as the group that broke away from the Moro Islamic Liberation Front, the Bangsamoro Islamic Freedom Fighters, said they were adopting a “wait-and-see” attitude on the preliminary agreement, emphasizing their army would not give up the struggle for independence.

“This Framework Agreement paves the way for a final, enduring peace in Mindanao. It brings all former secessionist groups into the fold; no longer does the Moro Islamic Liberation Front aspire for a separate state,” Aquino said.

“This means that hands that once held rifles will be put to use tilling land, selling produce, manning work stations, and opening doorways of opportunity for other citizens,” Aquino added.

The framework agreement spells out the creation of a new autonomous political entity to be called Bangsamoro, which, Aquino said “symbolizes and honors the struggles of our forebears in Mindanao, and celebrates the history and character of that part of our nation.”

The framework agreement will be the first in a series of pacts the two parties will craft in order to empower the Bangsamoro, which will replace the current Autonomous Region in Muslim Mindanao (ARMM) and have far greater political and economic governance powers.

The new breakthrough in the Mindanao peace process comes after 13 exploratory meetings in 21 months under the Aquino administration. It is the 32nd round under the facilitation of Malaysia beginning in 2003. It also comes more than four years after the failed signing of the landmark but controversial Memorandum of Agreement on Ancestral Domain that sparked a year-long war in Central Mindanao.

“This framework agreement is about rising above our prejudices. It is about casting aside the distrust and myopia that has plagued the efforts of the past; it is about learning hard lessons and building on the gains we have achieved,” the President explained.

The Bangsamoro will be the fifth time an autonomy setup is being formulated to address Moro political aspirations. But this will only be the third time such formulation was done in the context of peace negotiations.

The framework agreement defines a roadmap for building the competency of the Bangsamoro as a political entity.

“The Constitution and lawful processes shall govern the transition to the Bangsamoro, and this agreement will ensure that the Philippines remains one nation and one people, with all of our diverse cultures and narratives seeking the common goal,” the President said.

He added that his administration “has pledged to supporting a law that will truly embody the values and aspirations of the people of Bangsamoro. “

“Any proposed law resulting from this framework will be subject to ratification through a plebiscite. Once approved, there will be elections,” Aquino further said.

The crafting of a basic law is expected to happen within the transition phase that is widely expected to start anytime in 2013.

With respect to the Bangsamoro, the national government “will continue to exercise exclusive powers of defense and security, foreign policy, monetary policy and coinage, citizenship, and naturalization,” Aquino said.

“The Filipinos of Bangsamoro, on the other hand, will be assured a fair and equitable share of taxation, revenues, and the fruits of national patrimony,” the President added.

Mr. Aquino stressed that “institutions must be fixed, and new capacities must be built nationally and regionally in order to effectively administer the Bangsamoro.”

“The citizenry, especially the youth, must be empowered so that new leaders may emerge,” he added.

The President has urged the public to actively participate in discussions about the content of the framework agreement, which will be published before the parties sign the agreement.

The public uproar against the MOA-AD in 2008 was principally brought about by its secrecy, which bred negative perceptions.

Lawyer Zainudin Malang of the Mindanao Human Rights Action Center said the agreement would be “an opportunity to end the conflict.”

Lawyer Ishak Mastura, a trustee of the ARMM Business Council, called the pact  “a starting point of a long political process towards genuine autonomy.”

“It is a very important signal to the world that the Philippine government has the political will to continue the peace process, no matter the ups and downs,” Mastura said.

He said the negotiations were different from previous talks as these went through consultations with stakeholders.

“It’s a good start for peace and development in Mindanao,” Piñol said.

In Zamboanga City, Father Angel Calvo of the Peace Advocates Zamboanga said the framework agreement “can be a decisive step to the final agreement for the creation of the New Autonomy political Entity.”

Acting Gov. Mujiv Hataman of the Autonomous Region in Muslim Mindanao also welcomed the framework agreement, saying it would pave the way to the region’s new political entity .

Hataman, who is running for ARMM governor the 2013 elections, said that should he win, he would be “willing to serve as a transitional government in case a peace pact is inked.”

“Anything that is good for the Bangsamoro, we will support, but it that fails, we will maintain our stance and that is independence for Mindanao,” Mama told the Inquirer by phone.

“If it succeeds, then we will support and recognize it, otherwise, our dream for independence of Mindanao remains,” he added.

Ricky Juliano, vice president for Mindanao of the Philippine Chamber of Commerce and Industry (PCCI), said the business community in Mindanao, especially in Muslim Mindanao, welcomes the framework agreement, citing the dividends Mindanaoans would get as result of it.

“It will surely improve the business climate and then the quality of life of all Mindanaoans,” Juliano said.

The conflict between the government and the separatist group has reportedly left more than 15000 people dead.