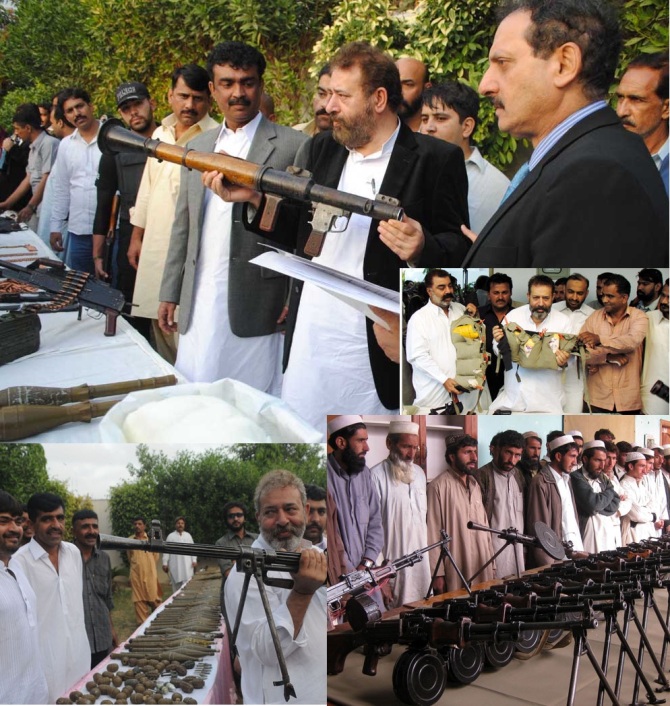 JNN 14 Oct 2012 Karachi ; As per the reports from our sources the Taliban have opened about 22 Units offices in the different areas of Metropolis of Karachi. And Due to which Activists of the Awami National Party (ANP) in Sohrab Goth have already closed party offices after receiving threats from the banned Terrorist  Group, the Tehreek-i-Taliban Pakistan (TTP).

According to the sources , after the Operation in South Waziristan, and Swat the terrorist elements who were wanted in different acts of terrorism , have fled to the Metropolis of Karachi , as Karachi caters to a big Population of Pakhtoons , and the basic elements which have fled from the South Waziristan Operation and Swat were Pakhtoons , and who have their relatives and friends in Karachi , and it was the safest Place for them to Mingle in the Masses , with out the chances of getting recognized , as Karachi is home to A Big No. of Pakhtoons , bigger than Peshawar and Quetta, which are the Capital Cities of KPK and Balochistan .

As these terrorist were mostly Pakhtoons , so they took refuge in Karachi , in the areas and localities which were Pre Occupied with the Pakhtoon Population , and where the ANP Units and wards were already working , as when they came there association and awareness was much less, so they took the shelter , under the cover of the Local Area Unit / Ward offices of the ANP , as some how or the other they had connections in these offices , through their family members and friends , and due to their criminal record and trained Terrorist activities , ANP Unit offices / Wards in those areas , became more Powerful , and thus , they were welcomed in these Unit / Ward offices with Open arms .

But as the time passed and their sizeable quantity reached one by one , then they started their activities , again separately under their Original Banner of TTP, and finally after the Passage of about 2 years , when they have re organized and as by this time they were even well aware of the areas of Karachi . They switched back to their Original mother terrorist Organisation of TTP.

And now According to sources in the ANP, TTP members in Karachi have asked people from the Mehsud tribe in Sohrab Goth to leave the party, otherwise they will be killed. The party’s activists in Sohrab Goth, Manghopir, Kunwari Colony and Sultanabad were under such Pressure from these trained terrorist Network that they have to close the unit and ward offices of ANP from these areas and have removed party flags and graffiti from their houses and party offices.

Even the High archy of the ANP , including the Senator Shahi Syed , have admitted of the above Mentioned scenario  and now feels Helpless infront of these terrorist , as Shahi Syed even told our correspondent in one of his Interviews , that even their Local leaders , who were running the show in Karachi , received threats from these Taliban Terrorist that they have to pay the Protection Money , to save their lives , otherwise they can not guarantee their Lives , So the Local Leaders of ANP , were so afraid and were under such pressure , that they agreed to Deliver the Protection amount ( Taziraat as Per TTP terms ) , and some even Delivered the agreed amount to the TTP Leadership in the North Waziristan , by Personally visiting the TTP leader ship running the show , and to ask from them the  forgiveness of  their Past Mistakes , so they can spare their Lives.

After the threats, the other local ANP leaders and activists have reportedly left Karachi and gone into hiding. Eight unit offices have been closed by party activists in Gadap and Sohrab Goth including the offices of Unit-12, Unit-18, Unit-3, Unit-16, Unit-8, Unit-7 and the Unit office of Lassi Goth.

“They [the TTP] have asked all the people of our Mehsud tribe leave ANP and join their organisation,” said an ANP official, who spoke on condition of anonymity.

“They call from different cell numbers or send their messages through their messengers and ask for money. They are getting Rs1,000 extortion money every month from each shop of Super Market in Sohrab Goth.”

According to the ANP official, the threats have come from people associated with the TTP’s Waliur Rehman group, headed in Karachi by a man called Khan Zaman. The men reportedly change their location and names periodically to evade the police. They are also allegedly involved in extortion, and have made demands for up to Rs4 million depending on the financial status of their targets.

“People pay them because of the fear of being killed. The name of TTP has spread fear among the people which is why the Mehsud people are not rising against them, otherwise we can eradicate them in a day,” he added.

“Kunwari Colony and Sohrab Goth are the most affected areas where the TTP is targeting our people. They are taking extortion money from Wazir and Mehsud people of these two areas,” said a leader of the ANP in Sindh.

The TTP is also targeting the affluent members of ANP for extortion and have killed people for ‘betraying them’. “This is very dangerous for our party and it will damage the party because they [the TTP] live among us and we can’t recognise them. They can easily kill you as you can’t hide from them.”

The TTP has neither accepted nor denied its involvement.

According to Bashir Jan, the ANP is already at war with the TTP and has been receiving threats from the group for the past four years. “They have killed our people in Karachi but the threats in Sohrab Goth are real..

ANP’s Bashir Jan said that his party has always fought against tyrants. “We, the followers of Bacha Khan, are not afraid of death or the Taliban’s threats and we are fighting against them. If someone is afraid then he should leave the party.”

As the Government and the LEA have already wasted a lot of Precious time , in which they have taken no Actin against these TTP terrorist , and as per Our sources these TTP terrorist are involved in the Target Killing of Shia Men and even are recruiting Young Men from Karachi to make their Network More strong and functional with the local representation in the terrorist network, and now are becoming the threat to the Biggest Party representing Karachi. , and it is due to which their High archy is disturbed against them and are issuing statements against these terrorist Organisation and Splinter Groups.

One of these Splinter group is Named as Qari Saeed Group , which is headed by Qari Saeed and is involved in a Number of cases of Shia Target Killing . This group comprises of about 14 Terrorist , which are presently working under the Umbrella of Lashkar e Jhangvi the terrorist wing of Sipah e Sahaba Pakistan.

Originally Qari Saeed was the Member of Jaish e Muhammad Headed by Masood Azhar . His name became famous and known due to his involvement in the Daniel Pearl Murder case , and as he was also involved in the terrorist  training of some US Citizens , who were arrested from Sargodha.

After he was released from the Prison, he went to Waziristan for training his group , where he came in contact with the Lashkar e Jhangvi , and now he works for LeJ , and one thing common in all these splinter groups , is that they all claims and are in the command of the TTP ,which is finally in association with the Al Qaeda , which is their Mother Organisation on International level.