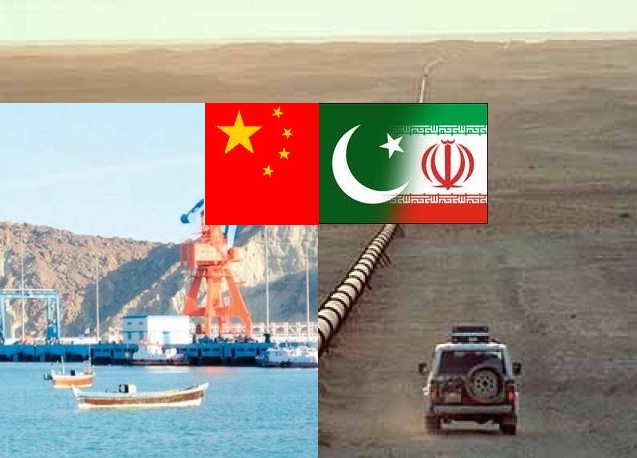 JNN 10 Mar 2013 Karachi : The Gwadar Port which was built in collaboration with Chinese Government , and was the Neccessity for China and Whole of the Region , and Basically for the Central Asian Republics as that is the Only viable and feasible route for the export of the Caspian Sea Oil Reserves to the Rest of the World , and it is these reserve that to tap these reserve the US and the Allied forces have invaded Afghanistan and have staged the Drama of 9/11 , at the Cost of Killing about 4000 American Citizens .

As the Successive Pakistani Government which were all ways under the Pressure of the US Hegemony , were not able to counter the threats by the US Establishment to give the administrative Control of the Gwadar Port to the Most Reliable Neighbour of Pakistan , which has always Proved its friendship in the the Hour of need for the Pakistani People , As China is the Biggest Emerging and growing Economy of the World , And with which the US and the Western Powers are afraid of .

THe Chinese Government have a Plan Not only to cater the Importance of Energy Corridor through Gwadar Port , but also to get a most viable and economical Trade and Transit route for its Products to the World , and if it is used by a trust worthy friend, then it not only helps them , but supports Pakistan also with a Better Economy ,as Not only the trade and Economic activitiy of Pakistan will enhance but Monetary benefits will also give rise to the Pakistani Economy , with the taxes , royalty and the Duties collected by the Government of Pakistan .

But As this will become the Biggest Port of the Region , therefore it will over Shadow the Other Regional Ports Like UAE , India , Saudi Arabia , and it is because of these facts , these Countries are investing Hundred of Millions of Dollars to sponsor terrorism and Jihadi Groups in Pakistan , to destabilize the region , which can change the shape of the Pakistani Nation.

Secondly as the World is at Present Energy Starved , and the Biggest economies of the world are now on the Plans for austerity and trying to control the ever falling graph of their economies and are trying to capture the countries which are energy Producers , and the whole of the Arab Uprising was a Part of these Plans , to control and to tap the energy sector of the World , as the God has gifted these Arabs with the Best energy reserve , which they are ruining by spending them on their luxuries and corruption.

Pakistan is Also badly effected by the energy crisis , as the Local industry have come to almost a Halt , due to the energy crisis and to the terrorism infested by the US , Saudi and UAE Governments to destabilize the country as they knew that if Pakistan will prosper , their economies will be badly effected , as Due to the Gwadar Port UAE economy will be in down the drain , as after the Gwadar Port will become 100% Operational the Hub will be around Gwadar , and Not Dubai or UAE, and if the Caspian Oil also starts flowing from Gwadar , then the Oil from there will be of Much better Quality and Price in Comparison to the Saudi Oil , so The Saudi Government will loose a lot of Business and have to face a tough competition , due to Operational Gwadar Port , and lastly the US Hegemony of Ruling and dictating the World will also be gone down the drain , as if Pakistan Becomes the Energy Corridor of the World and the Econmic Epic Center , then it will be hard for the US to dictate the Region , in which a Giant Like China , Old enemy like Russia and the Energy supplier like Iran stands along side Pakistan , So the already Debt Ridden US and EU Economies will be forced to leave this region and to starve to death ,as they don’t have any other Place on earth , which can give them so much benefits and economy uplift.

To conclude here the Gwadar Port Operation by the Chinese is a long Process and it will take another 5 – 7 years to give us the economic benefits , But to revise and revitalize the Pakistani Economy , the Energy Sector has to be Pumped instantly with cheap energy in Big Quantity , for which the Iran – Pakistan Gas Pipe line is the Only answer at Present , as it will reduce the Operating cost of all the Industries of Pakistan , as the day the Irani Gas will start flowing , the Cost of the Domestic Gas will be cut about 20 – 25% , and this will not only ease the Burden on the Normal and average Pakistani , but will also make the Pakistani Products competitive in the World Market , giving a Jump Start to the falling Exports of the Pakistani Goods , And as the Industrial Structure of Pakistan is already intact and is only lacking due to the Energy Crisis , so it is only waiting for the flow of ample amount of energy , which will rotate the Wheel of the economy by creating Jobs for Millions , cheap Products and Cartrage for the whole of the Nation , and Prosperity will be Once again the Song of the Golden bird.

But as the Pakistani Prosperity will strengthen it , to win the Long awaited Asian Tiger Title , and will go ahead with Plans to Curb the Menace of Terrorism , Economic Stability and thus , Once the Economic Stability rules in Pakistan , then the UAE Ports will not be viable for the World , with no Industrial Structure , No Skilled Labour , and No Infra Structure , So it will have to loose all in the favour of Pakistan which is not acceptable for the UAE Monarchy .

Saudi Arabia will also have to come out of the Dream of becoming of the Sole Leader of Islamic World and the Arab World , as if the Caspian Oil Reserve once come in the Market , then the Already Debt Ridden Saudi Economy will have to come to austerity measure and all their luxuries have to be cut down which they are doing , at the cost of their Poor Nationals , who are not even allowed to enjoy the benefits of Concrete Shelters and living in conditions below poverty line.

India which has been long working to become the Super Power of the Region , but first with the tremendous Growth and Potential of China and then if Pakistan the Arch Rival also becomes a Prosperous Economic Power , then it will be over shadowed and will have no Place for any growing  Power or brokerage of the So Called Super Powers of the World.

And finally the US which is the Biggest Player in this economic down turn and disintegration of Pakistan , will face the consequences , which will be irreparable for it , as if Only Pakistan the Atomic Power of the Islamic World is Economically Strong , and creates friendly ties with all its Neighbors like Iran , China , Post 2014 Afghanistan , and the Central Asian Republic , and Russia also which is Still a Power , then the Whole of the Block from Iran to China and Pakistan to Russia , will be such a Strong Economic Block , that US and EU Economies will be starving , which they have already started .

But Now here is a very Important Part of this Scenario , that Pakistani Public have to literally take the control of the Present Situation , as right now they are being Manupilated by Persons like President of Pakistan Asif Ali Zardari, As this is a very strong signal among all the Intellectuals of the International and Pakistani Society that the PPP Government Led by Asif Ali Zardari was in Power for the last 5 years which are now being coming to an end , and if Mr. Asif Ali Zardari was so loyal to the cause , and loyal to the Prosperity of the Pakistani Nation then all the above scenario discussed above are not a result of any Day long or a Month long process, but all the players and the Intellectuals knows all these things for decades , and So Mr. Asif Ali Zardari also knew all these things from the first day of His Presidency , and if he would have implemented all these steps of Iran – Pakistan Gas Pipeline , and the Gwadar Port , then with in the 5 year reign of their Presidency , they would have even reaped the fruits of the whole process , but conducting and implementing , all such efforts at a time when it is only a matter of days were remaining , and their Government has to be taken over by Care taker Government , followed by a fresh elections, for the next 5 years term.

These all cards played by Mr. Asif Ali Zardari at this time , are now being taken as his Bargaining Plan , with the Active Players of this whole Scenario which Includes US , Saudia  and UAE , as implementing all this will not change any thing overnight , as even for the free flow of Gas from Iran will also take 15 atleast months , in Ideal conditions, so now all the Players have atleast this much time to re consider and re think , to make the atmosphere and conditions favourable for Mr. Asif Ali Zardari , that he should be given guarantees that he and his Party will be supported to Head the Next Government of Pakistan for another 5 year term , and once he gets in Power and get a complete control of the Situation after winning and forming the Government for the Next 5 year .

As all in this Scenario and if he finally get the best deal and is again been choosen and selected to be the President with full authority for the Next 5 year term with a deal to scrap all these then he ll be the most suitable and favourable man to retreat from his earlier commitments and agreements , as this will not be easy and an Impossible Political task for anybody else to retreat and give excuses to the earlier done International agreements , under any circumstances , whether it may be Iran – Pakistan Gas Pipeline or the Gwadar Port Operations.

Now the burden again lies on the most vibrant Pakistani Nation that how to make these deals irrefutable, for the Progress and the Bright Future of Pakistan.

As to choose among the Debt Ridden US and EU economies who have been busy doing the budget cuts in their defense , Health and educations sectors , and have already done Big Budget cuts in Economic Aids And Assistance Programs to the countries like Pakistan, as they are fighting a War of their surivival , and as per the History tells us that Pakistan have always grown for better in the era of their Sanctions , or to side with their long trusted friend like China and Iran , who have the Potential to be the Economic Giants of the World and with whose cooperation and support , Pakistan can get rid of Terrorism and can itself become the Economic Tiger of the Asia .

One thought on “IP Gas Pipe Line and Gwadar Port , The Key to Bright Future of Pakistan”