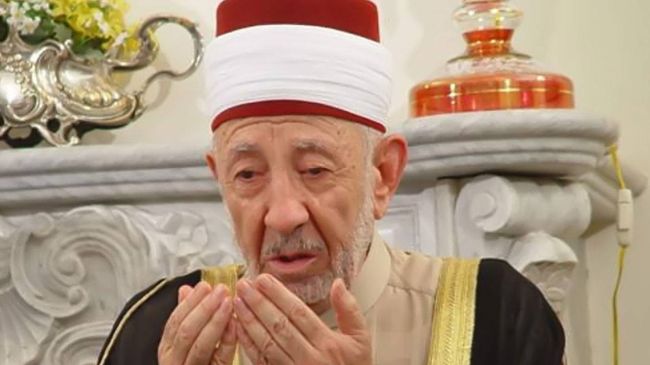 JNN 22 Mar 2013 Damascus : A suicide bombing has torn through a mosque in Damascus killing a top Sunni Muslim preacher along with at least 41 others.

According to Syrian sources, a bomber blew himself up inside al-Eman Mosque in the Mazraa neighborhood of the capital on Thursday.

At least 41 worshipers were also killed and 84 others wounded in the blast at the Iman mosque in the capital’s Mazraa district, the Syrian Arab News Agency reported. State media outlets described the explosion as a suicide bomb attack, but some opposition groups said it was a car bombing.

Mohammed Said Ramadan al-Bouti was the imam of the Ummayad mosque, the largest and most important Sunni mosque in Syria, and was known for his support of Syrian President Bashar al-Assad

Bouti, 84, was teaching a religious class at the Iman mosque the time of the explosion. In a sermon last month, the cleric called on devout Muslims to wage jihad in support of Assad.

In recent months, Syrian TV has carried his sermon from mosques in Damascus live every week.

Although no group claimed immediate responsibility for the attack, the Syrian Wahabi opposition has targeted pro-government Sunni clerics in the past.

The attack also appeared similar to a bomb attack in Damascus last July that killed several top security officials, including Assef Shawkat, deputy chief of staff of the Syrian military and Assad’s brother-in-law.

An eyewitness at the Iman mosque who spoke on the condition of anonymity for security reasons, said that the blast took place between 7 and 7:30 p.m.

Suicide bombings is a Key element of the Wahabi Terrorist around World. And the Wahabi Terrorist are known to Blew up Mosques and Religious Places as they are from the Takfiri Ideology , who are being brain washed and given lessons that they are the Only Most sacred ones rest all are Infidels liable to be Killed , any where and any time.

Foreign-backed militants fighting against the Syrian government also fired mortar shells at a sports stadium in the western city of Idlib. The attack caused only material damage.

Two Syrian civilians were also killed and more than 20 others injured in a terrorist car bombing in the western city of Homs, SANA reported.

Syria has been experiencing unrest for two years and many people, including large numbers of army and security personnel, have been killed in the turmoil.