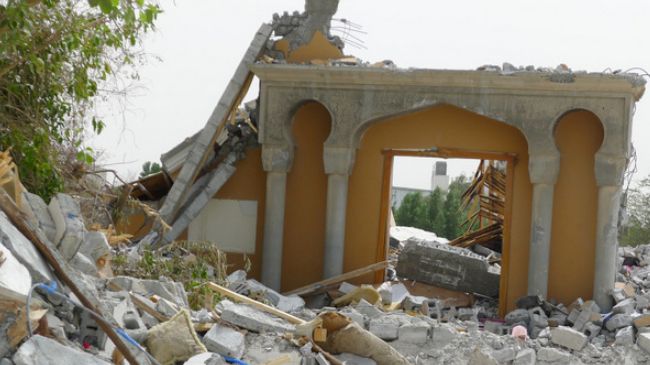 JNN 23 Mar 2013 Manama : The Bahraini opposition bloc al-Wefaq has heaped scorn on the government for its desecration of mosques, saying the Al Khalifa regime is in a morally downward spiral.

Al-Wefaq made the criticism on Friday, shortly after Bahraini troops targeted a mosque in the northern village of Daih with tear gas, preventing people from praying in the house of worship.

Al-Wefaq said Bahraini security forces have also attacked schools and hundreds of homes, causing deaths by suffocation due to the use of tear gas.

Since mid-February 2011, thousands of pro-democracy protesters have staged numerous demonstrations in the streets of Bahrain, calling for the Al Khalifa royal family to relinquish power.

On March 14, 2011, troops from Saudi Arabia and the United Arab Emirates invaded the country to assist the Bahraini government in its crackdown on the peaceful protesters.

According to local sources, scores of people have been killed and hundreds arrested.

Physicians for Human Rights says doctors and nurses have been detained, tortured, or disappeared because they have “evidence of atrocities committed by the authorities, security forces, and riot police” in the crackdown on anti-government protesters.