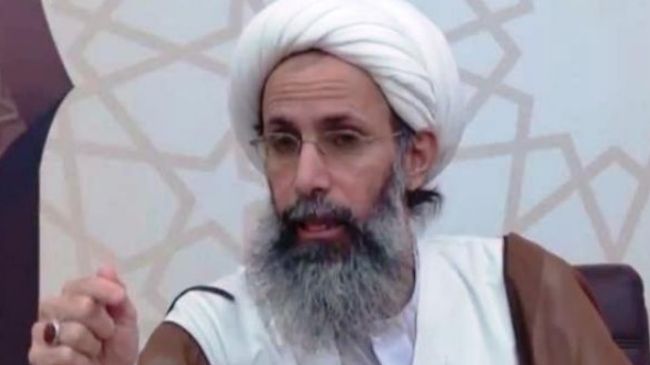 JNN 27 Mar 2013 Riyadh : After About 8 Months in captivity without any charges , now A court in Saudi Arabia has charged prominent Shia cleric Sheikh Nimr al-Nimr with “instigating unrest” and “seeking foreign meddling” in the kingdom.

Sheikh Nimr appeared in court on Tuesday, nearly eight months after he was arrested for criticizing the ruling Al Saud family and demanding the release of political prisoners, AFP news agency quoted a witness as saying.

The prosecutor also accused the cleric of supporting uprising in Bahrain, where Saudi troops are assisting the ruling Al Khalifa family in its brutal crackdown on demonstrations.

The court panel adjourned the hearing until a lawyer is appointed.

Sheikh Nimr was shot and arrested by regime forces in Awamiyah in July 2012 after he demanded the “release of all those detained in anti-regime protests, and all prisoners of conscience.

His family members said he was badly tortured in jail. Nimr’s sister has recently said through her Twitter account that prison authorities are denying her brother medical care.

Saudis have staged several demonstrations in the Eastern Province to demand the release of Sheikh Nimr since he was arrested.

Saudi activists say there are more than 30,000 political prisoners, mostly prisoners of conscience, in jails across the Kingdom.

According to the activists, most of the detained political thinkers are being held by the government without trial or legitimate charges and that they were arrested for merely looking suspicious.

Some of the detainees are reported to be held without trial for more than 16 years. Attempting to incite the public against the government and the allegiance to foreign entities are usually the ready-made charges against political dissidents.