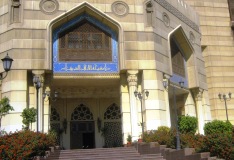 JNN 10 Apr 2013 Cairo : A female student at the Al-Azhar College for Girls in Assiut is facing an investigation to ascertain if she is a Shi’a or not. As this is a worst form of Discrimination and Sectarianism as she is might be rusticated from the college , because of just being belonging to the Shia Sect .

A female student at the Al-Azhar College for Girls in Assiut is facing an investigation to ascertain if she is a Shi’a or not.

Mahmoud Shehata, dean of the college, confirmed on Monday that the student has been referred to the legal affairs department. He added that if she is found to be a Shi’a then legal action will be taken against her, according to state-affiliated news agency Al-Ahram.

Shehata also confirmed that the director of the girl’s dormitories Magda Thabit has been relieved of her duties following complaints filed by a number of students, reported Al-Ahram.

Malek Adly, a lawyer for the Egyptian Centre for Economic and Social Rights, said that there is no law stating that this student, if found to be Shi’a, could face legal action. “Under the constitution the state has a responsibility to protect her. We will see what happens,” he said. “We currently have a fundamentalist government and institutions like these are allied with them. The government has an Islamic project. What is this? I do not know and I am a Muslim. It is just fundamentalism,” he added.

Hala Salah El-Din Mohamed, one of the students who filed a complaint against her fellow student, said: “This girl has been in the dormitories for three years and has been secretly calling for people to convert to Shiism. Now she is doing it publically.”

Approximately 60 students protested against the administration on Sunday for the way it has handled the investigation, reported Al-Ahram.

“They carried out an investigation and they helped her to escape. We want her to be expelled,” Mohamed said. She continued: “We do not want her in our faculty because she is a Shi’a”. He claimed that Shia people believe there was prophet after Muhammad.” Anyone who believes this, she added, is an “infidel”.

Doaa Aboul Nasr, a reporter in Assiut, told Daily News Egypt that the investigation carried out by the college involved asking the accused student to perform the ablutions for prayer and demonstrate how she prays. Aboul Nasr reported that the girl hesitantly agreed to their request.