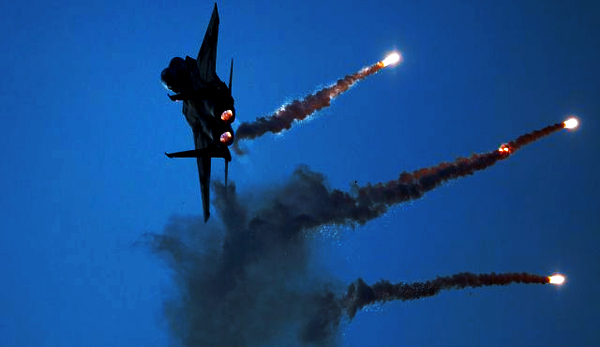 JNN 06 May 2013 Damascus :  Israeli warplanes bombarded areas in and around the Syrian capital Damascus on Sunday, setting off a series of explosions and leaving several people dead and injured, Syrian state media reported.

The airstrike, the second in three days and the third this year, signaled a sharp escalation of Israel’s involvement in Syria.

The Syrians government called the attacks against its territory a “flagrant violation of international law” that have made the Middle East “more dangerous.”

Information Minister Omran al-Zoubi, who read a Cabinet statement to reporters Sunday in Damascus following an emergency government meeting, claimed the Israeli strikes are evidence of Israel’s links with terrorists trying to overthrow the Syrian government.

He added that Syria has the right and the duty “to defend its people by all available means.”

According to The Associated Press, Israel’s military on Sunday deployed two batteries of its Iron Dome rocket defense system to the north of the country. It described the move as part of “ongoing situational assessments.”

A senior Israeli official, who spoke on condition of anonymity in order to disclose information about a secret military operation to the media, confirmed that Israel launched an airstrike in the Syrian capital early Sunday but did not give more precise details about the location.

Gen. Masoud Jazayeri, assistant to the Iranian chief-of-staff, told Iran’s Arabic-language Al-Alam TV that Tehran “will not allow the enemy (Israel) to harm the security of the region.” He added that “the resistance will retaliate to the Israeli aggression against Syria.”

Syria’s state news agency reported explosions at the Jamraya military and scientific research center near Damascus and said initial reports indicate they were the “result of Israeli missiles.” It said there were casualties but did not give a number.

A Syrian national said the strikes occurred around 3:00a.m. “Damascus shook. The explosion was very, very strong,” said al-Shami adding that one of the attacks occurred near the capital’s Qasioun mountain that overlooks Damascus.

He said the raid targeted a military position for the elite Republican Guards that is in charge of protecting Damascus.

Another Syrian, who lives in the Damascus suburb of Douma, said “the explosions were so strong that earth shook under us.” He said the smell of the fire caused by the air raid near Qasioun was noticeable miles away.

Lebanese President Michel Suleiman said on Friday that Israeli warplanes have repeatedly violated his country’s airspace in recent days, and he called on the United Nations to press Israel to halt them.

The Syrian government says that the chaos is being orchestrated from outside the country, and there are reports that a very large number of the militants are foreign nationals.

In an interview recently broadcast on Turkish television, Syrian President Bashar al-Assad said that if the militants take power in Syria, they could destabilize the entire Middle East region for decades.

“If the unrest in Syria leads to the partitioning of the country, or if the terrorist forces take control… the situation will inevitably spill over into neighboring countries and create a domino effect throughout the Middle East and beyond,” he added.

US President Barack Obama has said Israel has the right to launch airstrikes on Syria, one day after the Israeli regime’s second airstrike on the country this year.

In an interview with the Spanish-language network Telemundo in San Jose, Costa Rica on Saturday, Obama stated that Israel has the right to protect itself from what he called advanced weapons shipments to Lebanon.

He said he would not comment on the veracity of the reports on the attack and would let the Israeli regime “confirm or deny whatever strikes that they’ve taken.”

“What I have said in the past and I continue to believe is that the Israelis justifiably have to guard against the transfer of advanced weaponry” to resistance movements like Hezbollah, Obama stated.

Earlier, Israel confirmed it carried out an aerial attack on Syria on Friday, claiming it targeted a shipment of “game-changing” weapons.

On January 30, the Syrian Army issued a statement saying that two people were killed and five others injured in an Israeli airstrike on a research center in Jamraya, which is located about 25 kilometers northwest of Damascus.

The Syria crisis began in March 2011, and many people, including large numbers of soldiers and security personnel, have been killed in the violence.

The Syrian government says that the chaos is being orchestrated from outside the country, and there are reports that a very large number of the militants are foreign nationals.

One thought on “Israeli War Planes strike Damascus to escalate tension and support the terrorist , while US backs the Airstrikes”