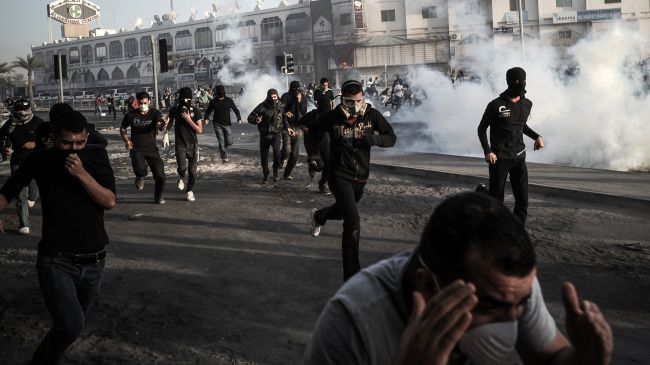 JNN 7 May , 2013 Manama : A defense lawyer in Bahrain says a court has sentenced 31 protesters to 15 years in prison each for roles in firebomb attacks against security forces during an anti-government demonstration last year.

The defendants, aged 16 to 34, all come from Sitra island, a hotbed of protests since early 2011 when Bahrainis began an uprising seeking a greater political voice in the Persian Gulf kingdom, The Associated Press reported.

Hundreds of protesters and activists have been convicted in connection with the uprising in the strategic kingdom, which is home to the U.S. Navy’s 5th Fleet.

Since mid-February 2011, thousands of anti-government protesters have been staging regular demonstrations in the streets of Bahrain, calling for the Al Khalifa royal family to relinquish power.

On March 14, 2011, troops from Saudi Arabia and the United Arab Emirates invaded the country to assist the Bahraini government in its crackdown on the peaceful protesters.

Scores of protesters have been killed — many under torture — and numerous others detained and transferred to unknown locations during the regime’s brutal onslaught on protesters.

In mid-March 2011, Saudi-led forces were dispatched to the Persian Gulf island upon Manama’s request to help quell the nationwide protests.

In addition, Bahraini security forces have reportedly kidnapped a number of women, including doctors, university professors, and students.

Human rights groups and the families of protesters arrested during the crackdown say that most detainees have been physically and mentally abused and that the whereabouts of many of them remain unknown.

Physicians for Human Rights says doctors and nurses have been detained, tortured, or disappeared because they have “evidence of atrocities committed by the authorities, security forces, and riot police” in the crackdown on anti-government protesters.