JNN 27 May 2013 Lahore : Chief of the Terrorist Organisation Lashkar e Jhangvi , Malik Ishaq was released in the Punjab’s capital Lahore on Thursday without being prosecuted.

He was arrested and held in custody in February. As he was involved in Provocative Speeches and since his earlier release terrorist attacks has intensified against the Shiite Community , and the Pakistani forces , His group was outlawed by the Pakistani government shortly after his arrest.

Most terrorist organizations like Lashkar-e-Jhangvi and Sipah-e-Sahaba are enjoying the support of Saudi Arabia, as they follow the same Brand of Wahabi Islam , which is being Propogated by the Saudi Monarchy around the world , which teaches terrorism and is against the Main Stream Islam’s teaching.

Ishaq’s imprisonment was a precautionary measure during Pakistan’s election. He has orchestrated numerous terrorist attacks against Shia Muslims in Pakistan. Most of the attacks have been in the city of Quetta in southwestern Pakistan where more than 180 Shias have been killed since January.

Pakistan held elections on May 11 , in which Nawaz Sharif’s Pakistan Muslim League-N Party won the Majority National Assembly seats and are now in the Process of forming the Government to rule for the Next five year term .

Nawaz Sharif has also a soft corner for Taliban the Mother Organization of all the Wahabi Organistaion in Pakistan , supported by Saudi Arabia and Used by the CIA agents for the Disintegration, and to create Chaos in Pakistan .

He has repeatedly said in his speeches that negotiation should be done with the Proclaimed Terrorist Organization Taliban and the terrorists of the group should be requested to come to the table to negotiate a deal , who have Publicly and Practically worked against the Pakistan , and have killed and slaughtered Thousands of Pakistani Citizens and armed Forces Personnel , and have attacked the Armed Forces Sensitive Installlations , like GHQ, Mehran Base , and several Other Places .

Which will be a very dangerous Precedent set for the future to come as the Criminal and Terrorist organization will have a new Life , as they will know that even after committing the Most Henious crimes , one day they ll be set free of all their crimes , and finally they ll be negotiating on their terms with the governments to come .

But the God is great , as the History have given us a lesson that when ever Pharos think that they are Unbeatables , Moses is send by God to teach them a Lesson , finally when Yazeed e Munafiq thinks now he has attained So Much Power , that he can ruin Islam , and Defame and Deface Islam , Imam Hussain a.s , stoods in his way to create History of Glory and Honor , and Blocked his way for ever , as He gave his life , but left a chain of his followers who ll safe guard His Mission of Truth and Justice till the Dooms day , for which they feel it their Pride to sacrifice their lives for the sake of the Sacred Mission to Uphold the Real  Islam , as being sent by the All Mighty Allah, for the well being of the Man Kind . 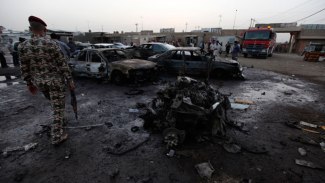 JNN 28 May  2013 Baghdad : A series of blasts ripped through Iraq’s capital on Monday, killing more than 70 and leaving many wounded, marking the latest in over 350 deaths this month as sectarian violence continues to overwhelm the country. END_OF_DOCUMENT_TOKEN_TO_BE_REPLACED