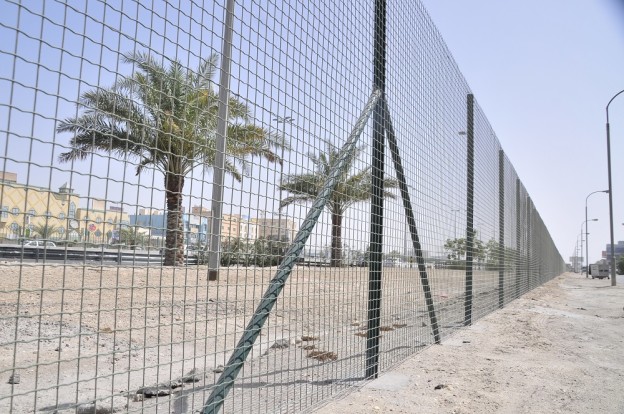 JNN 13 June 2013 Manama :  The Bahraini authorities have taken on a campaign to siege certain areas known to be opponent to the Government. A number of Shia residential areas have been isolated and surrounded with barriers or fences in order to contain protests inside.

The authorities first applied this method during the state of emergency back in 2011 by separating Sunni areas from Shiite areas with cement barriers. The regime did this as if to protect certain areas from others, only there is no motives for such fears on ground.

The blockades are put in joint roads between Sunni and Shiite areas (Budaiya and Duraz) and (Riffa and Aali). This illustrates the sectarian motives behind the blockades although no Sunni areas have been targeted by Shiite areas or the opposite. Which means the regime had intended to pass over to the public a planned envision during the peak of the official media incitement.

The Bahraini Population which regardless of Shia or Sunni Citizens both condemn the sectarianism , which is Implanted by the Bahriani Regime , to Divide the Population to Justify their Rule , and to show to the World , as the Sectarian Divide in the country , but instead of this as the Sunni Minority of the State also condemn the crackdown of the Government  and Brutality of the Regime , so now the Government has Planned another tactic to Practically divide the Sunni and the Shia Majority areas , by erecting fences in between them and to create and fan sectarianism officially , while till upto date there has not a single event reported of any type of even a verbal sectarian clash between the citizens of the Bahrain .

But it looks now the Regime is planning to Infest terrorist like Syria, Yemen , and Libya , so they can start sectarian attacks on both Shia and Sunni Population , and thus can fan sectarianism in the country , so the Government can Justify their Brutal acts of Worst type of Crack down on the Shia Citizens of the country.

The Pearl square, where the historic mass protest was held, has also been totally blocked with cement barriers and razor wire for over two years now.

The blockades in Bahrain remind the citizens of the Apartheid Wall in the West Bank and the Berlin Wall in Germany, both built for racial discrimination.