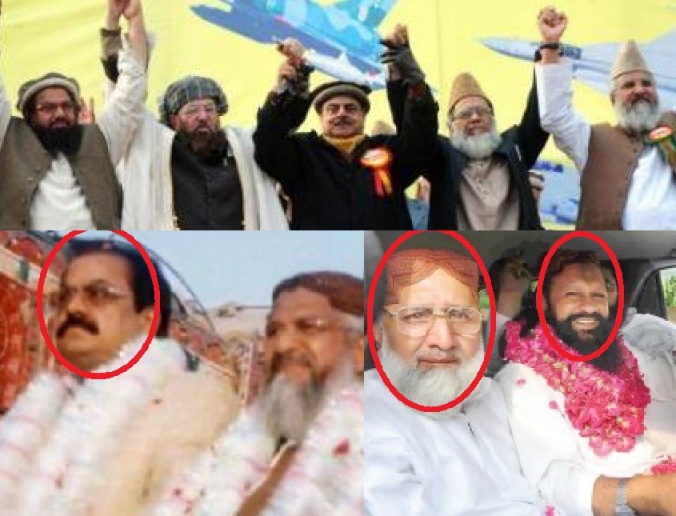 JNN 18 June 2013 Islamabad : Arresting Malik Ishaq under the MPO (maintenance of public order) and carrying out ‘targeted operations’ — whatever that means — is no way to handle the Lashkar-e-Jhangvi (LeJ). Action against the LeJ cannot be limited to Quetta, or even Balochistan because this is a group that is entrenched in every part of Pakistan, a group which spreads its poison from pulpits and Facebook pages alike, a group that is actively aided and abetted by a very active political wing Sipah e Sahaba Pakistan ( SSP / ASWJ ) Unlike their TTP allies, they cannot be geographically or politically isolated. A few scattered arrests cannot harm them.

Nor can they be negotiated with, in the mistaken assumption that bringing them into the ‘mainstream’ will somehow moderate them. That is folly. They have long since declared war on Pakistan, and nothing short of an all-out full-spectrum war, with all the pain and blood that entails, will rid us of them.

It will require Pakistan’s institutions to work together in a way that they have never done before. The civilians will need to be stop playing in the Hands of the Politicians Like Imran Khan and Nawaz sharif , who Play politics and debating semantics. The army and agencies will have to purge themselves of those who still mistakenly look upon this group as some kind of asset and it will require the judiciary to work with the government, agencies and the police to plug the holes that allow people like Malik Ishaq and his cronies to walk free time and again.

While this war must begin with intelligence-based police and paramilitary operations, it cannot end there. We must not allow the state to fool us with limited operations, eyewash arrests and the killing of foot soldiers while the commanders walk free and the infrastructure of terror remains intact.

A partial operation is in fact more dangerous than no operation at all. In the past, the LeJ has systematically killed and intimidated witnesses, the police and judges alike, and stopping short of its complete eradication means that they will do so again with the result that no one in the security agencies or judiciary will ever be willing to stick their necks out again.

If special courts are needed in which the identity of the witnesses, arresting officers and judges is concealed, then so be it. If secret evidence is allowed, with the right of bail and even the right to appeal suspended then so be it. If monitoring crosses the border into invasion of privacy, then so be it. If the most dangerous terrorists never even reach the court and are instead ‘disappeared’ or ‘encountered’ then so be it.

One cannot fight an enemy of this nature by adhering to rules or even without giving up some basic liberties and right; don’t fool yourself into thinking that this is possible. And guess what? It happens anyway. Politicians have never refrained from falsely implicating and victimising their rivals. The agencies have never shied away from torturing, killing and dumping ‘suspects’ and the police have never had many qualms in simply ‘removing’ certain criminals who got too big for their boots. In a civilised society such measures are reprehensible, but this is not a civilised society, nor is it likely to become one in the near future. This is a functioning anarchy spiralling towards civil war and disintegration, where the state has abdicated its responsibilities. As such, it’s not unreasonable to ask that these tactics be used against those who so richly deserve them.

And these are, in any case, ad-hoc and short-term tactics that will undoubtedly result in grave abuses if allowed to continue for very long. In the medium term, draconian anti-terror legislation and judicial reform will be needed to make sure that a weak FIR does not result in the release of mass murderers. The law-enforcement agencies acting against the terrorists must be protected from reprisals and special high-security jails will be needed to prevent the all too frequent escapes, and to eliminate the ability of these killers to use jails as bases of operations and recruiting grounds.

More importantly, no distinction can be made between the LeJ and its political wing, the Sipah e Sahaba Pakistan (SSP) , now under Alias Ahle Sunnat Wal Jamaat (ASWJ) . But a ban must go beyond simply outlawing a name, it must outlaw an entire ideology and those who propagate it — whether through a pulpit, party platform or twitter account. Similarly, strict rules must be made to disallow the airing of the viewpoints of these groups and their spokespersons on the media. There can be no TV interview of Ehsanullah Ahsan of TTP or Ludhianvi of SSP , and Like minded Persons.  Free speech ends where incitement to violence begins. Those making electoral alliances with terrorists, and the ASWJ is nothing less than the political wing of a terrorist organisation, must be treated like terrorists themselves.

Make no mistake, there will be retaliation and blowback on a scale that even blood-stained Pakistan has not yet witnessed, but better to pay the price now than die the death of a thousand cuts. Sooner or later those being butchered will take up arms and then we will be faced with a nightmare that will make Syria look like a walk in the park. This then, is a prescription to deal with the cancer that is the LeJ. It will be painful and at times the cure will seem worse than the disease, but it must be done. It won’t happen. It won’t happen because our politicians are spineless; our agencies are either incompetent or in cahoots, and our superior judiciary is more interested in admitting blasphemy petitions against Sherry Rehman, Or the taking Suo Moto actions on the Bottle of Wines in Atiqa Odho’s Bags. Once the headlines move on, so will all of them. The arrested killers and their political cronies will be released, threats will be made and massacres will be carried out. And the Lashkar-e-Jhangvi and its allies will be one step closer to a victory that was made possible not because we lost, but because we refused to fight.

One thought on “It is Now OR Never – For the Love of PAKISTAN , Annihilate LeJ, SSP & TTP, or Ready to Loose Pakistan”