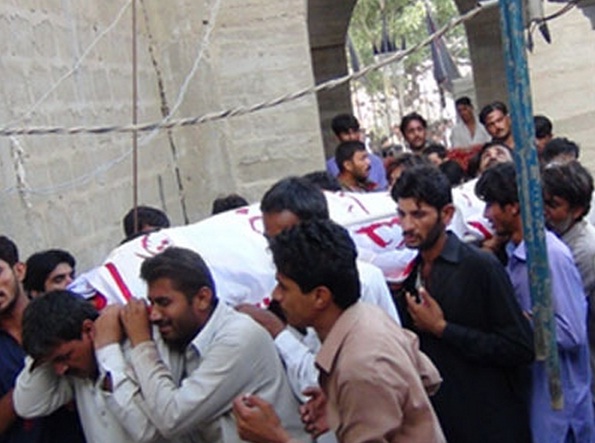 JNN 23 June 2013 Karachi : 5 shia Men have been Martyred and Atleast 8 other were Injured in an attack by the Tehrik e Taliban Terrorist on the Hussaini Imambargah in Bilal Colony , Korangi , Karachi .

As per the details the terrorist first Opened fired upon the Unarmed Shia Men who were sitting in the area Outside the Hussaini Imambargah. And after some time attacked again and threw 2 Hand Grenades , due to which the casualty increased .

According to our  Correspondent, the terrorists of banned outfits Tehrik e Taliban Pakistan , who were Using the Allah Wali Mosque as their Den and safe sanctuary for carrying out their terrorist activities , and who have always Problem with the Activities of the Shia Men Performing their Religious Obligation ,as they use to come to Pray and Do Azadari , Have even earlier have created Problems , which was even reported to the LEAs , but No action was taken against these Anti State Elements , who were taken the cover of sectarianism .

On Friday Night as the Shia Men were sitting in the Open area infront of the ImamBargah Husiainia ,Bilal Colony , Korangi , Karachi,  the Group of terrorist came on Bike , and Opened fire on the Unarmed Shia Men , Due to to which 2 Shia Men were Martyred , and others were critically injured.

And as the terrorist fled away after committing their Henious crime , the Police was informed and the Rescue Mobile were called , for shifting the Bodies and the Injured Men, And as in the mean time other Shia Men ,who heard of the tragic Incident also came for the rescue operation, and as the Police reached the spot , the Terrorist of TTP , once again came on a Bike and hurled 2 Hand Grenades on the Shia Men , who have gathered after the Incident. And due to which casualty increased , and a Number of Shia Men were critically injured. While the terrorist fled away Un restricted , while the Police Men have already reached the Venue .

After the second Incident the Police and the Rangers cordoned off the area, and the Injured and the Bodies were shifted to the Hospital , and in this Process 5 Shia Men have been martyred , while about atleast 9 Men have been injured , who are still Under treatment.

Police, Rangers cordoned off the area while, dead bodies and injured persons have been shifted to the hospitals.

The martyrs were identified as Shafique Ahmed s/o Mazahir Ali , Mehran Ali, S.Qurban Ali ,  Haji Buksh and others. The body of four out of five martyrs have been shifted to the Interior Sindh for their funeral prayers to their Native towns and burial , however, the funeral Prayer of Shaheed Haji Buksh was offered at Hussaini Imambargah , Bilal Colony area of Korangi in the presence of hundreds of mourners.

It has been even reported earlier , and Now it has been even been witnessed that Post election , the target Killing and Terrorist Attacks on the Shia Community has exceeded Multiple folds across Pakistan  , as it looks that the Government & the Establishment , which is luring the Terrorist Taliban to come to the table with the US Administration so they can also get their share in the Process , as the US want to leave , and in this Process they wan to be safe till their final exit in 2014.

So Just to win their Names in the good Books of US and Taliban , the Pakistani Establishment and the New Government ,which has even come in to power with the Blessings of the Saudi and the US administration , Has given a free Hand to the Terrorist of Tehrik e Taliban Pakistan , who are the Off shoots of Afghani Taliban , and share the same Takfiri Ideology , and thus resulting in the accelerated Killing and Attacks on the Pakistani Shia Community.

Now it is time for the Shia Leadership and Notables to immediately come up with a Plan and Strategy , So they can counter the threat of this growing Menace of Pro Talibanisation of Pakistan and the Region .

As Now every body in the world has written and is the talk of the town that the US and all his allies are Pro Takfiri Salfi Wahabi , while all the enemies of US are Pro Shia , whether it may be Iran , Syria, Iraq , or even Russia.

So to safe guard the Interest of the Shia Community , the leaders and Elders should devise a strategy before losing any more time and the sacred Blood of the Martyrs , that the community is able to counter the Upcoming Bigger threat in the Shape of Pro US and Saudi Takfiri Wahabi Taliban ruling Not Only Afghanistan , but also influencing Pakistan

As with out the Pakistani Establishment the Taliban can not rule or even think of having some share in the Afghani Government , as Per Present they only have influence in 8 provinces of Afghanistan out of 32 Provinces , that also in the Pashtun dominated provinces neighboring Pakistan. While the rest of the Persian speaking Provinces are out of their control and reach as the rest of all the Provinces are in control of the Afghan Warlords and Mostly are in the ones , which use to be in the Once Northern Alliance Led By Ahmed Shah Masood , which was totally against the US and allied forces and were their Biggest enemies , rather were in the Pro Russian Club.

7 thoughts on “Shia community Pays the Price as US luring Taliban for their safe Exit , 5 Shia Men Martyred by the TTP firing in Karachi Pakistan”