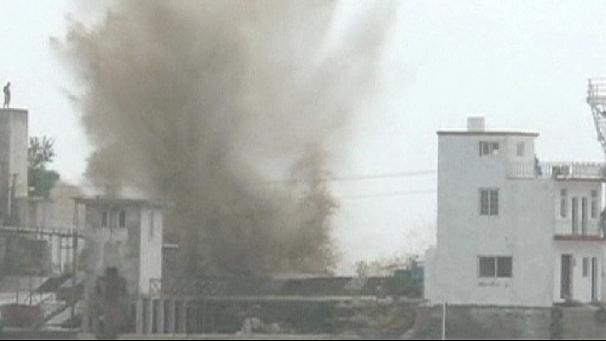 JNN 15 July 2013 Beijing : Eastern China is bracing for torrential downpours from Typhoon Soulik which has already forced the evacuation of 500,000 people after killing two in Taiwan.

The China Meteorological Administration said on Sunday that the typhoon lashed coastal Fujian province packing gusts of 118 kmph when it made landfall “but had weakened to a tropical depression as it moved inland”.

According to the AFP news agency, about 5,500 soldiers have been deployed for relief and rescue work if needed in Fujian and neighboring Zhejiang areas where more than 500,000 people have been moved to safer areas.

While Soulik wrought havoc in Taiwan, tearing roofs from homes, triggering landslides that blocked roads and leading to the cancellation of 350 flights, its impact on eastern China was less severe.

No deaths or injuries were reported, the official Xinhua news agency said, adding almost 31,000 ships were called back to port and 20 flights cancelled.

The torrential rains have swelled rivers beyond warning levels in some areas, and waves up to nine-meters-high pounded sea defences in Ningde city.

In Taiwan, two people were killed and 104 others injured by the storm, with one town reporting widespread landslides and floodwaters a storey high. One person was reported missing.

The storm was set to dump up to 18 centimeters of rain on parts of eastern China over 24 hours as it moved further inland, forecasters said.

The torrential rains affected 382,000 people and toppled 1,076 houses in 80 townships in three cities of the province.

The rains also pushed water in some local rivers above warning levels.

Officials are calculating the cost of the storm, with the Zhejiang city of Wenzhou alone facing a direct economic loss of $34m, the agency said.

Large swaths of the country has already been hit by downpours even as the death toll from a rain-triggered landslide in southwest Sichuan province rose to 43 late on Saturday after more bodies were retrieved.