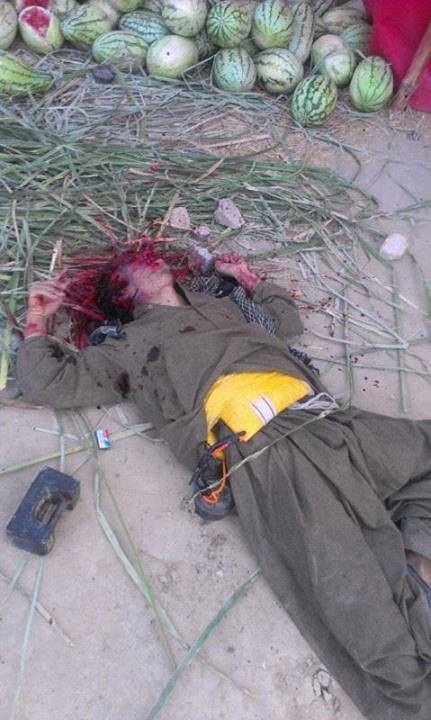 QUETTA: A suicide bomber who was on his Mission to explode near a Mosque , to Kill Shia Sect Muslims was killed by The Brave and Alert residents of  Hazara Town in Quetta, the capital of Balochistan on Saturday.

He said residents tried to stop the suspected bomber from entering the area but he refused to do so. “Residents who were already on alert, took no chances and  then fired and killed him on the spot,” he said.

One bullet hit into the head of suicide bomber and killed him on the spot and suicide jacked did not explode, added the police.

Mehmood said a suicide jacket and a hand grenade were recovered from his possession.

“A major terrorist attack was averted,” he claimed.

DIG Operations Fayyaz Sumbal, said the bomber, who had strapped explosives around his body, could not explode himself because of timely action by the Shia Hazara Volunteers Gaurding the Town .

He confirmed that the suicide jacket recovered from the attacker had been safely defused. The body of the bomber was shifted to Combined Military Hospital for postmortem, he said.

Another police official, DIG Operations Fayyaz Sumbal, confirmed that a suicide jacket was recovered from the attacker had been safely defused.

He said the body of the bomber was shifted to Combined Military Hospital for postmortem.

The bomb disposal squad rushed to the side, after receiving information, and defused the suicide jacket. One hand grenade was also recovered from custody of killed bomber.

The police have told that ten kilograms of high level explosives material and ball bearings were fixed in the suicide jacket and these would have caused a massive devastation, if exploded.

A large number police and paramilitary Frontier Corps (FC) personnel reached the spot and started investigation into the incident.

Quetta has once again witnessed a recent surge in incidents of violence, with Takfiri terrorist of  Taliban and their allied groups of Lashkar e Jhangvi have once again accelerated their attack on the Shia Hazara community in several bombings and gun-attacks.

On Monday, two youths belonging to the minority community were gunned down in an apparent targeted killing on Shahrah-i-Iqbal.

On July 15, four men belonging to the community were killed when gunmen sprayed bullets on their vehicle on Masjid road area.

On June 30, a deadly suicide bombing at an Imambargah killed 30 members of the minority community. The banned Lashkar-i-Jhangvi had claimed responsibility for the blast, one of a series of bombings this year by the sectarian outfit targeting the Hazaras.

While the Pakistani Establishment and the Political Parties in Government are still trying to lure the Taliban to get the favour of their US & Saudi Maters who are the sponsors of the terrorism in Pakistan and are Putting their all efforts to Dis Integrate Pakistan , But still it looks that not only the Pakistani Politicians who out of their greed and selfishness Don’t  think of Pakistan , but even the Defenders of Pakistan , have also negotiated their oaths which they have taken to defend the Nation and its Citizens irrespective of their Cast , Creed or Religion.

But with this Self Defensive act and Gaurding of their Areas and the Religious Places have made one thing Clear that as now even the Citizens of Pakistan have come to the conclusion , that if they have to Live ,then they have to even Defend them selves and their loved ones and have to fight themselves with the enemies of Pakistan . 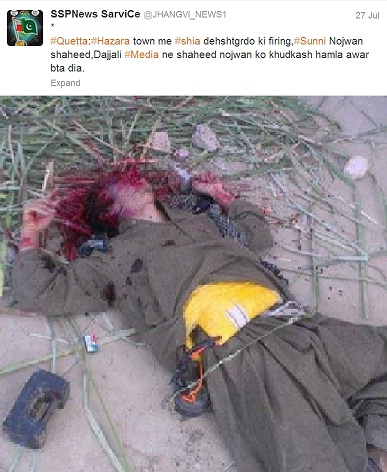 NOTE : We would like to Inform our subscriber that Sipah e Sahaba Pakistan (SSP ) , which claims to be Non Violent Organisation on record Claims that the Suicide Bomber , who have come to the Hazara Town to Blast himself and Go to Hell , have been owned by the SSP as it is quite evident from their following given tweet from their Official Account , as the Suicide Bomber who was , wearing a Suicide Explosive Vest , and was also carrying Hand Grenades on Person , which is can even be verified from the following Picture , that is an acclaimed Suicide Bomber , and which has been , very bravely and with Active Vigilance has been Shot and sent to Hell, by the Security Volunteers , before he can cause any damage to the Shia Community.