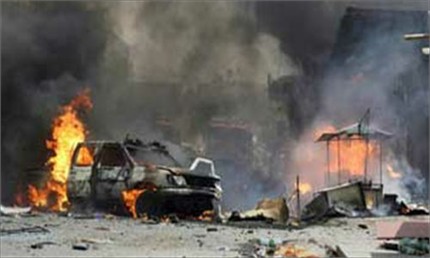 JNN 11 Aug 2013 BAGHDAD — At least 40 people were killed and 250 others wounded in a wave of violent attacks across Iraq on Saturday, mostly in the capital Baghdad, police said.

The ten car bomb attacks in Baghdad, mostly targeting markets, restaurants and cafes, killed at least 17 people and injured 100 others as Iraqis were celebrating Eid ul Fitr , the 1st of Shawal the end of the Muslim fasting month of Ramadan.

Five people were killed and 18 others injured when two car bombs exploded in Shaab area in northeastern Baghdad, a police source told on condition of anonymity.

Meanwhile, four were killed and 14 others wounded when a car bomb blew up in Kazimiya district in northern Baghdad, the source said.

Also, a car bomb exploded in Sadiya district in southwestern Baghdad, killing three and injuring 16 others, while another blast in Abu Dshir district in the southern part of the city killed two and wounded 11.

Furthermore, one was killed and 12 others were wounded when a car bomb ripped through New Baghdad area in the southern part of the capital, the source said, adding that another car bomb attack in Al Amil area injured a total of 14.

A car bomb also went off in Zafraniya district in southern Baghdad, killing one and injuring nine others, while two more car bombs in the southern part of the city killed one and wounded six others, he said.

In the northern city of Tuz Khurmatu, some 200 km north of Baghdad, a suicide attack near a Shiite mosque Martyred 11 people and wounded 60 others, a local police source told .

Another car bomb went off near a Shiite mosque in Kirkuk, 250 km north of Baghdad, Martyring one and wounding four others, the source said.

Two car bombs struck the central and northern parts of Nasiriyah, some 350 km south of Baghdad, killing four people and injuring 67 others.

Also on Saturday, five people were killed and 11 others wounded in a car bomb attack near a popular market in the holy city of Karbala, some 100 km southwest of Baghdad.

In the town of Al Musab, 50 km south of Baghdad, two people were killed and eight others wounded in attacks by light weapons, a local police source said.

Iraq is witnessing its worst eruption of violence in five years, which raises fears that the country is sliding back to the full- blown civil conflict that peaked in 2006 and 2007, when monthly death toll sometimes exceeded 3,000.

The UN Assistance Mission for Iraq recently reported more than 1,000 Iraqis were killed and more than 2,300 were wounded in acts of terrorism and violence in July, the deadliest month in more than five years.

2 thoughts on “Car bombs kill atleast 69 , injures 250 on Eid ul Fitr in Shia areas of Baghdad and across Iraq”