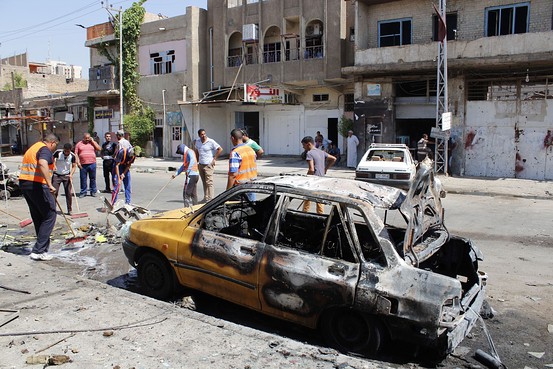 JNN 17 Aug 2013 BAGHDAD — A series of car bombs ripped through the Iraqi capital Baghdad on Thursday, killing 21 and wounding 73, the latest wave of attacks in months-long escalation in violence.

The attacks occurred when a total of six car bombings and a roadside bomb struck six crowded areas in Baghdad.

One of the car bombs went off in the district of Alawi, near the Green Zone which houses the Iraqi government offices and some foreign embassies, killing four people and wounding 12, a police source told Xinhua on condition of anonymity.

Another car bomb ripped through a parking lot in Baghdad’s northern district of Kazmiyah, killing seven and wounding 20 others, the source said.

Two more car bombs exploded simultaneously in al-Qanat Street in the eastern part of the capital, killing two people and wounding 10 others, the source added.

In addition, a roadside bomb went off in a thoroughfare in Amil district, wounding seven people, he added.

No group has so far claimed responsibility for the attacks, but the al-Qaida front in Iraq, in most cases, were responsible for such suicide bombings in the country.

The attacks came despite that Iraqi Prime Minister Nuri al- Maliki on Wednesday vowed to continue carrying out offensives against insurgent groups.

“The operations that we launched in hunting down the terrorists and those who stand behind them will continue until we protect our people,” Maliki said in a statement.

He said that his troops had detained more than 800 suspected militants and dozens of others were killed in the operations in the Wahabi areas in north and west of Baghdad as well as the other Wahabi infested provinces in western and northern pars of the country.

Tensions and violence have been at its highest level since the U.S. troops pulled out from the country at the end of 2011.

The sectarian tension has been growing since late December 2012, when the Sunni Muslims started their protests against the Shiite- led government in six of Iraq’s predominantly Sunni provinces and the Sunni districts in Baghdad.

As the Saudi Sponsored  Jihadi are fanning sectarianism , and are propogating Wahabi School of thought and are carrying out these attacks and against the Sunnis and Shia both and trying to paint the picture as The Majority based Shiite Government of marginalizing the Sunni Minority, and claim that the Shiite-dominated Iraqi security forces were indiscriminately arresting and torturing their people , which is not true , as the Jihadist who are living under the Cover of the Sunni Muslims , so when ever a Jihadist is been arrested or sent to Prison, they make the Sunni Minority belief that they are being persecuted.

Iraq is witnessing its worst eruption of violence in recent years, which raises fears that the country is sliding back to a full-blown civil conflict that peaked in 2006 and 2007, when monthly death toll sometimes exceeded 3,000.

The UN Assistance Mission for Iraq recently reported that over 1,000 Iraqis were killed and more than 2,300 wounded in acts of terrorism and violence in July, the deadliest month in more than five years