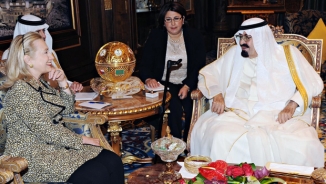 JNN 8th Sept 2013 Washington : American historian Webster Griffin Tarpley says former US secretary of state Hillary Clinton has received 500,000 dollars in jewelry from Saudi Arabia to support war on Syria. As The majority in the House of Representatives are expected to vote against the Syrian War, with only a few dozen “yes” votes and a massive undecided contingent leaving open the door for not just a loss, but a huge loss for the war party.

END_OF_DOCUMENT_TOKEN_TO_BE_REPLACED

JNN 8 Sept 2013 Lahore : Punjabi Taliban Terrorist an Off Shoot Branch of Tehrik e Taliban Pakistan Martyred 7 Shia  including 5 of a family in a village of Gujrat district of Punjab province on Friday night. END_OF_DOCUMENT_TOKEN_TO_BE_REPLACED

JNN 8th Sept 2013 Kabul : At least one person was killed as clashes broke out on Saturday between the police and protesters who had attacked the Iranian consulate in the western Afghan city of Herat, Press TV reported. END_OF_DOCUMENT_TOKEN_TO_BE_REPLACED