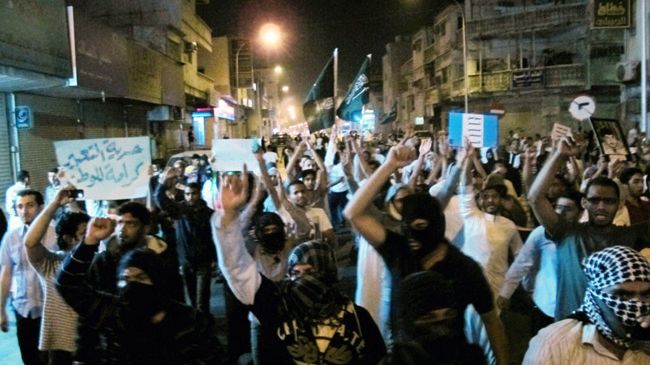 JNN 11 Sept 2013 Riyadh : Thousands of people have attended the funeral ceremony of a young man killed in the eastern Saudi Arabian city of Awamiya during a crackdown on dissidents by regime forces.

Protesters chanted slogans against Saudi rulers during the funeral ceremony, which was held on Monday, and demanded that the perpetrators of the crime be brought to justice.

Ahmed al-Meslab, 19, was killed in Awamiya on September 5, located in the eastern Qatif region, after security forces raided the houses of anti-regime activists in the area.

The forces surrounded several houses in al-Jamima township of the city, and started firing at people in the streets.

According to Abna News Agency, a young man was killed in the attack and 15 people were wounded among which seven were reported to be in critical condition.

One house was also burned down in this attack.

It is worth to mention that al-Moslab was shot in the back and leg by security forces while forces were trying to arrest him. In that day, the security forces raided some houses in al-Awamiyah searching Shiite youths whom were among the 23 opposition activists accused of organizing protests in Qatif.

Since February 2011, protesters have held demonstrations on an almost regular basis in Saudi Arabia, mainly in Qatif and Awamiyah, primarily calling for the release of all political prisoners, freedom of expression and assembly, and an end to widespread discrimination. Al Saud rulers have also been the target of the protests, especially after security forces killed five protesters and injured many others in the province in November 2011.

Amnesty International has called on the Saudi authorities to “end their repeated moves to stifle people’s attempts to protest against the widespread use of arbitrary detention in the country,” and to respect the right of people to peaceful protest.