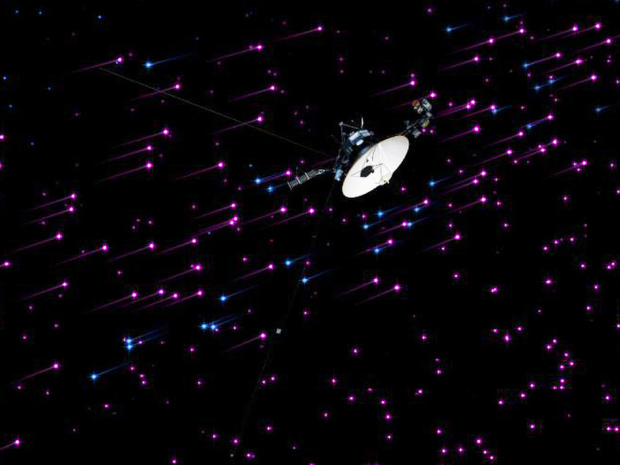 New and “unexpected” data indicated 36 years after it was launched, Voyager 1 has left the heliosphere, the bubble of hot, energetic charged particles surrounding the Solar System, and entered into a region of cold, dark space, known as interstellar space, NASA said.

It said the spacecraft arrived in this cold, unexplored interstellar region on or about Aug. 25, 2012, and is now about 12 billion miles (19 billion km) from our sun.

“Now that we have new, key data, we believe this is mankind’s historic leap into interstellar space,” said Ed Stone, Voyager project scientist based at the California Institute of Technology in a statement.

“The Voyager team needed time to analyze those observations and make sense of them. But we can now answer the question we’ve all been asking — ‘Are we there yet?’ Yes, we are,” Stone said.

The findings are published in the U.S. journal Science.

Voyager 1 first detected the increased pressure of interstellar space on the heliosphere in 2004 and since then scientists have ramped up their search for evidence of the spacecraft’s interstellar arrival.

The Voyager 1 spacecraft uses myriad instruments onboard to send data back to Earth, and scientists have been waiting for certain measurements, namely, a drop in solar particles and a spike in galactic ones, to alert them to Voyager 1’s passage through the heliopause, or the boundary between solar plasma and the plasma of interstellar space.

Don Gurnett, principal investigator of Voyager’s plasma wave science instrument at the University of Iowa, and colleagues provide measurements of electron plasma oscillations, measurements that were not possible in previous studies, between 9 April and 22 May of this year, revealing that Voyager 1 was in a region of space with an electron density of about 0.08 per cubic centimeter. And, according to current models, the density of electrons in the interstellar medium should be between 0.05 and 0.22 per cubic centimeter.

The team reviewed its data and found an earlier, fainter set of oscillations in October and November 2012. They calculated that the electron density surrounding the spacecraft during that time was about 0.06 per cubic centimeter.

“We literally jumped out of our seats when we saw these oscillations in our data — they showed us that the spacecraft was in an entirely new region, comparable to what was expected in interstellar space, and totally different than in the solar bubble, ” said Gurnett. “Clearly we had passed through the heliopause, which is the long-hypothesized boundary between the solar plasma and the interstellar plasma, probably in August of 2012.”

The new plasma data suggested a timeframe consistent with abrupt, durable changes in the density of energetic particles that were first detected on Aug. 25, 2012. The Voyager team generally accepts this date as the date of interstellar arrival.

“Voyager has boldly gone where no probe has gone before, marking one of the most significant technological achievements in the annals of the history of science, and adding a new chapter in human scientific dreams and endeavors,” said John Grunsfeld, NASA’ s associate administrator for science.

“Perhaps some future deep space explorers will catch up with Voyager, our first interstellar envoy, and reflect on how this intrepid spacecraft helped enable their journey,” Grunsfeld said.

Voyager 1 and its twin, Voyager 2, were launched 16 days apart in 1977. Both spacecraft flew by Jupiter and Saturn. Voyager 2 also flew by Uranus and Neptune. Voyager 2, launched before Voyager 1, is the longest continuously operated spacecraft. It is about 9.5 billion miles (15 billion km) away from our sun. Scientists are not certain when Voyager 2 is expected to cross into interstellar space, but they believe it’s not very far behind.