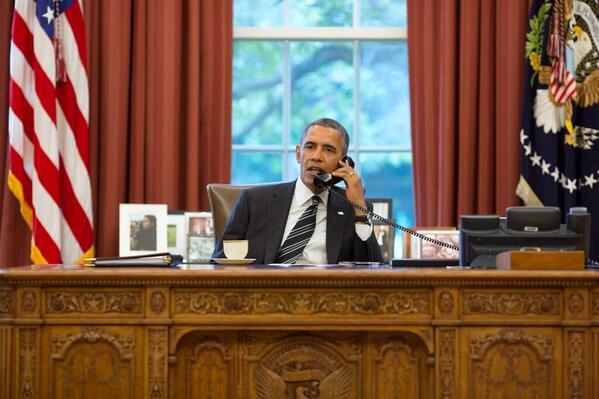 JNN 28 Sept 2103  President Barack Obama announced Friday that he had spoken by telephone with Iran’s president Hasan Rouhani — the first direct conversation between leaders of both countries since Iran’s Islamic revolution in 1979.

In hastily arranged remarks in the White House briefing room to announce the breakthrough,

The surprise diplomatic overture came after Obama and Rouhani had traded letters following Rouhani’s  election earlier this year. The White House had proposed an informal meeting between the two leaders this week in New York around the United Nations General Assembly, which both men attended. But officials said the Iranians had concluded that the timing was wrong.

Describing his phone conversation with President Obama as “historic,” Iranian President Hassan Rouhani took to Twitter on Friday with a series of a fascinating messages that stunned and encouraged many foreign policy observers.

“In phone convo, President # Rouhani and President @ BarackObama expressed their mutual political # will to rapidly solve the # nuclear issue,” Rouhani wrote to his 64,000 plus followers.

In another tweet, Rouhani noted that he ended his conversation with Obama by saying, “Have a Nice Day!” and that the Obama responded by saying, “Thank you. Khodahafez.”

The phrase is a common way of saying goodbye in the Persian language and is literally translated as, “”May God be your Saviour.”

For its part, the White House used Twitter to publish an official photo of President Obama during his phone conversation with Rouhani. The caption to the photo reads, “Historic phone call in the Oval Office: Pres Obama talks w Iran Pres Hassan Rouhani this afternoon.”

The tweets represent a pair of interesting historical marks for the two countries. First, is the more obvious significance being paid to the phone conversation itself – the first between a U.S. and Iranian president in more than 30 years.

The Hawks in both parties have warned Obama against too quickly embracing Rouhani and easing up on crippling economic sanctions tied to Iran’s alleged nuclear weapons program.

In the White House briefing room, Obama noted “important obstacles to moving forward” and cited “deep mistrust” between the United States and Iran.

But “while there will surely be important obstacles to moving forward and success is by no means guaranteed, I believe we can reach a comprehensive solution,” the president Obama said.

The U.S. and its partners insist that Iran is seeking nuclear weapons. Tehran says its intentions are to build a peaceful civilian energy program. Successive American presidents have tightened economic sanctions on Iran and threatened the use of force if Tehran seems likely to develop a nuclear weapon.

But after the Syrian Stand Off against US of Using force against the Syrian Government Led By Bashar Al Asad , in which Russia Played a Key role in defusing the tension and standing in the way of any Possible strike against Syria by US , which is a Strong Iranian Ally , and The Club which consist of China , Hezbollah, Iran ,Iraq, Russia and South American Countries have now once again have proven that the World is again Bi polar and Russia has come back with a full force , and Under the Leadership of Putin , it has Once again attained the heights of Being called as the Super Power of the World.

And this is even being sensed by the US Administration and Pentagon , as now the Ice is started to melt down and US wants to defuse all the tension around to save its Image of the World Power as economically China has already taken over the edge , and now even Politically and on terms Russia has proven that , it is not going to close its last Naval Base in Syria , rather it will start building its Empire again from the last remaining Brick that is Syria , from where it with drew about 20 Years Back.

“Now, we’re mindful of all the challenges ahead,” Obama underlined. “The very fact that this was the first communication between an American and Iranian president since 1979 underscores the deep mistrust between our countries, but it also indicates the prospect of moving beyond that difficult history.”

“A path to a meaningful agreement will be difficult,” Obama underlined. “The test will be meaningful, transparent and verifiable actions, which can also bring relief from the comprehensive international sanctions that are currently in place.”

The call does not raise the prospect for direct U.S.-Iran nuclear negotiations. Obama said he would pursue the talks through the so-called “P5+1” — the United States, Russia, Britain, France, China and Germany.

A senior administration official, briefing reporters on condition that he not be named, said the conversation occurred at 2:30 p.m. in Washington and lasted 15 minutes. Rouhani was in New York for the annual U.N. meeting.

Rouhani, who broke word of the conversation on his English-language Twitter feed moments before Obama spoke, provided more details.

In a phone conversation b/w #Iranian & #US Presidents just now: @HassanRouhani: “Have a Nice Day!”@BarackObama: “Thank you. Khodahafez.”

However, it’s also noteworthy that Rouhani is on Twitter at all. Iranians had previously been banned from using the site but in September the bans on Twitter, Facebook and other social media sites were lifted without formal notice. For his part, Rouhani has shown himself to be prolific at composing his own messages and re-tweeting the messages of others.

Rouhani has also been using the account to verify media reports on the progression of relations between the U.S. and Iran. For example, he re-tweeted a report that the two countries would appoint foreign ministers to arrange follow-up talks between officials after the conversation with Obama.

Israeli Prime Minister Benjamin Netanyahu, whose government has been starkly critical of Rouhani’s overtures to the West, was due at the White House on Monday.

“Throughout this process, we’ll stay in close touch with our friends and allies in the region, including Israel,” Obama promised.

Israel “has every right to be skeptical of the Iranian government” given “extraordinarily inflammatory” remarks and “threats” from Tehran, a senior administration official said.

The call came together at the last minute. Iranians let the White House know earlier Friday that Rouhani hoped to speak with Obama before returning to Iran later in the day, the offiical said.

Obama also hailed “a major diplomatic breakthrough on Syria” — a likely United Nations Security Council vote on a U.S.-Russian resolution “that would require the Assad regime to put its chemical weapons under international control so they can ultimately be destroyed.”

“This binding resolution will ensure that the Assad regime must keep its commitments, or face consequences,” the president said. “We’ll have to be vigilant about following through, but this could be a significant victory for the international community and demonstrate how strong diplomacy can allow us to secure our country and pursue a better world.”

Iranian President, Hojjat al-Islam Hassan Rouhani, has skipped a lunch banquet hosted by UN Secretary General Ban Ki-moon because the forbidden drink of alcohol was served at the tables.

The announcement has been made on Tuesday by Iranian officials who are accompanying the Iranian president during his visit to New York to attend the 68thsession of the UN General Assembly.