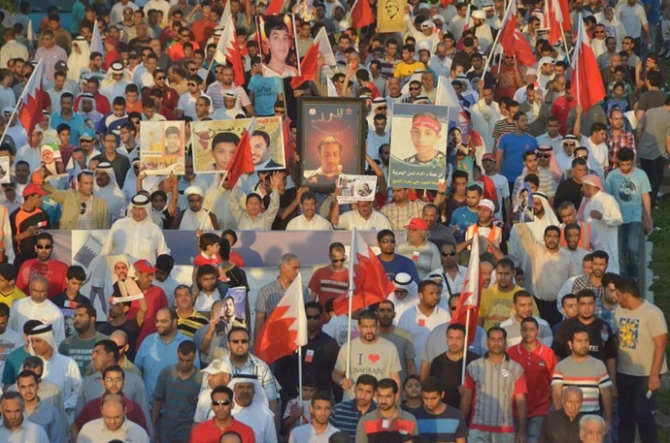 JNN 30 Sept 2013 Manama : Thousands of Bahrianis came out on the Roads to register their Protest in the west of the country’s capital, Manama, over the arrest of a prominent opposition figure, just hours after another rally ended with clashes with police.

The activist’s detention came after he spoke at a rally, saying, “We support peaceful movements, and we transparently state… that we are not part of the violent groups or their actions.”

On Friday, protesters hit the streets of Manama, waving Bahraini flags and chanting, “Revolution until victory,” and, “We will not forget the martyrs.”

The rally was largely peaceful, but followed another protest in a nearby village that saw clashes between the police and protesters who tried to approach Pearl Square in Manama, considered to be the cradle of Bahrain’s revolution.

“Police were the target of a terrorist act of Molotov cocktails being thrown and partly setting on fire a vehicle of law enforcement officers in Shaharkhan village west of Manama,” AFP reported the Interior Ministry as saying.

Protests started on Thursday night in Manama and nearby Shiite villages, with people demanding the release of political prisoners.

Police clashed with protesters in Bahraini demanding reform and the release of a prominent former MP, the interior ministry and witnesses said Friday, According to Al-Akhbar.

The demonstrators once again took to the streets in several cities, chanting slogans against the ruling Al Khalifa regime and calling for the release of jailed female activists.

Police fired tear gas to disperse the demonstrators who hurled stones and petrol bombs, they said.

Witnesses said protesters took to the streets of Manama and nearby villages, chanting slogans demanding the release of political prisoners and the fall of the ruling monarchy.

Marzooq is the secretary-general of Bahrain’s main opposition bloc, al-Wefaq. Marzooq was deputy speaker in Bahrain’s 40-member parliament before 18 al-Wefaq MPs walked out in February 2011 to protest violence against demonstrators.

The Gulf state is a predominantly Shiite country and has seen frequent unrest since authorities cracked down hard on the popular uprising against the ruling Wahabi monarchy in 2011.

Meanwhile, the Manama regime has lashed out at U.S. President Barack Obama for what he described during his UN speech as ‘sectarian tensions’ in Bahrain, Press TV reported.

In his address to the 68th annual Session of UN General Assembly on September 24, Obama likened the situation in Bahrain to that of Iraq and Syria, saying that Washington will make “efforts to resolve” what he called “sectarian tensions” in these countries.

The US president’s remarks drew angry reactions from the Manama regime’s high-ranking authorities.

Manama’s human rights record has come under scrutiny over its handling of anti-regime protests that erupted across the Arab country in early 2011.

On September 9, UN High Commissioner for Human Rights Navi Pillay told the UN Human Rights Council (HRC) that she was frustrated with reports of human rights violations in Bahrain.

She called on Manama “to fully comply with its international human rights commitments, including respect for the rights to freedoms of expression, peaceful assembly, and association.”

Human Rights Watch has accused the Bahraini government of violence and torture. Last week, they said that Bahrain’s law enforcement agencies had reportedly made a habit of regularly detaining child protesters, who are forced to undergo humiliation and cruel treatment often bordering on torture.

Human rights organizations have also accused the US and UK of turning a blind eye toward rights abuses in the country, despite numerous reports of violent crackdowns on opposition activists.

Many critics claim that the fact that the Gulf state is one of the hubs for deployment of the US Fifth Fleet may be behind the low-key approach.

At least 80 people have been killed since the pro-democracy protests erupted, according to the International Federation for Human Rights.