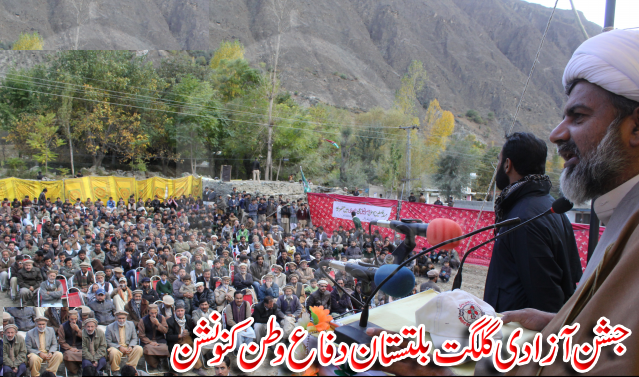 JNN 06 Nov 2013 Gilgit : MWM Organised “ Difa-e-Watan Convention ” (Defense of Pakistan Convention) , a public meeting in Gilgit on 3rd Nov 2013 ,  which was attended by tens of thousands of Shias of the area and the adjoining areas to condemned the US drones attacks on Pakistani soil and the terrorism Infested by the Taliban on the Pakistani People.

Addressing the Conference Allama Raja Nasir Abbas Demanded the Government to Severe their ties with the US Government which is the Main Cause of the terrorism in Pakistan , and also to Punish the Taliban Terrorist instead of Negotiating with them who are involved in the Terrorist activities and flaming sectarianism in the country , and have created a state with in a State which is completely against the sovereignty of Pakistan .

The Conference was held at the venue of Captain Zameer Shaheed Chowk , Momin Bazaar , Gilgit.

Allama Raja Nasir further demanded the constitutional right of the People of the area , who are deprived of their rights , as still this day Gilgit , Baltistan has not been approved as the Sixth Province of Pakistan , while it is been Federally administered , under the Northern areas of Pakistan , and the People of the area has still not been given their due right of electing and Nominating their representatives to the Legislative National Assembly , who can speak on their Behalf and can work for the Betterment and Uplift of the Remote and the Most Beautiful area of Pakistan , which has its own strategic importance , as being on the Border of the China and India , and controlling the Water and Natural Resources of Pakistan.

“Pakistan has to break off all relations with the U.S. and launch a military operation in the FATA to eliminate terrorists to assert its sovereignty. This is the only way out,” he stressed.

“U.S. and Kingdom of Saudi Arabia introduced American brand of Islam in Saudi packing and their brand brought instability in Pakistan, Afghanistan, Central Asia, Middle East and South Asia in particular,” he said.

He also announced the full scale Participation of MWM in the Upcoming Local Bodies Election of Gilgit – Baltistan , and urged the People of the area to Participate and Vote for his Party ,as he represent a Party which fully endorses the Basic Principles of Islam , and Condemn Sectarianism and Terrorism in all its forms and shapes.

He also mentioned  that the PMLN government has to prove its pro-Pakistan credentials , while as per their Manifesto even the Biggest and the Top Most Priority was on the energy Sector , and for which the Previous PPP Govt has already signed a Most Beneficial and Cheap Source of Energy , in the Shape of Iran – Pakistan Gas Pipeline of which Iran has already built the Pipeline and is ready to cooperate in the Building the Pakistani Part of the Pipeline , but Due to the Pressure of Saudi Arabia and US they are delaying the Project ,so later On they can scrap the Project and let the Pakistani Public suffer , in the consequences , as rather looking on other Costly Projects of Importing LPG from India and Qatar , which are Costly and not strategically viable and as a result Pakistani Public has to finally bear the Burden of energy starvation and if available even will be too expensive for the already under Pressure Poor Pakistani Public  & Economy.

He also asked the Pakistan Army , to revisit its policy and strength its ties with the Patriotic and Proven loyal and credible people of Pakistan , and not with those who have betrayed Pakistan and are still involved in the terrorist activities against Pakistan , and are involved in suicide attacks and killing of Army officials , he emphasized that followers of Our Last Prophet Mohammad (pbuh) and AhleBait (as) are the real Patriotic Soldiers of Pakistan.

At the same time he condemned the Government and Political parties over their mourning on the killing of a terrorist of outlawed Taliban adding that Saudi Arab was involved in the bloodshed in Pakistan with the hands of extremist Talibans.

Sahibzada Hamid Raza, head of Sunni Ittehad Council, urged that the outlawed TTP should lay down their arms without any delay and announce surrender forthwith. He said that Sunni and Shia Muslims of Pakistan want the PMLN government and Prime Minister Nawaz Sharif should not give the terrorists another chance to regroup and strengthen their position. He endorsed the proposals of Allama Nasir Abbas Jafari saying that the U.S. and the TTP plus its allies are the enemies of Pakistan.

He announced on behalf of 22 Sunni Parties “We Shia and Sunni are brothers and we will fight against enemies of Pakistan jointly and foil the conspiriacies of anti-Pakistan elements”.
SIC Chief said that the prime target of Taliban terrorsits are Pakistan armed forces, Sunni and Shia clerics because they are the defense line of Pakistan.

MWM Deputy Secretary General Allama Amin Shaheedi opposed the negotiations with Taliban saying that we would never accept the dialogues with the killers of 45000 Pakistani people.
He also demanded the representation of Gilgit-Baltistan in National Assembly and Senate, which is their Legitimate Right as Being Citizens of Pakistan.