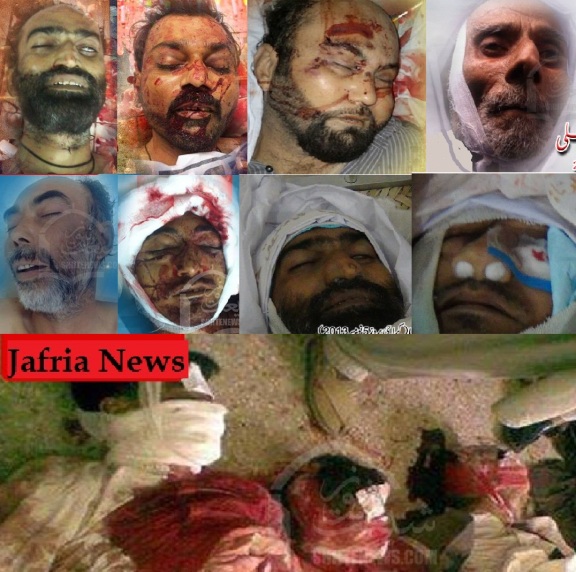 JNN 06 Nov 2013 KARACHI: As the New Islamic Year and the Month of Muharram was just about to start, the terrorists intensified their terrorist activities against the Shia Community, regardless of the fact that a full scale Operation against the terrorist and Criminals is being carried out, but No concrete or Hard evidence can be seen that the Operation has cleared the Den of the Taliban Terrorists from the City, which are No Go Areas even for the LEA’s.

On Nov 4th Nov At least five Shia Muslims, including two doctors, were gunned down Monday and three others were injured in different parts of Pakistan’s port city of Karachi, police officials said.

As per the details , On the same day two Shia doctors, Dr. Naseem Abbas and Dr. Shair Ali were also Martyred by terrorists of SSP an Off Shoot of TTP in Karachi.

According to reports, the TTP terrorists attacked on Car No. AJB-154 around Noon and Martyred Dr. Naseem Abbas at Tariq Road Area of Karachi. However, 50-years-old Dr. Shair Ali was targeted and martryred in Garm Chashma area of Manghopir area of Karachi.

“The killing pattern shows that they were apparently carried out on sectarian grounds,” Javed Alam Odho, the deputy inspector general of police told AFP.

The other two victims were killed in central district when Taliban’s Off Shoot Branch Sipah e Sahaba Pakistan’s Terrorists burst into a tailor’s shop and opened fire.

The targeted firing resulted the Martyrdom of Nadeem Abbas who was the Owner of the Shop and at time of the Incident he was accompanied by his 4 Workers most of them belong to the Shia Sect , while due to the Indiscriminate firing all were injured , but Shahbaz Ali , was fatally wounded and could not succumb to his injuries and breath his last at the Hospital , while he belong to the Sunni Sect .

The owner and a worker were killed and three others were injured.

“The attack seemed to be on sectarian lines as all of the people inside the shop were Shias,” senior police officer Aamir Farooqi said.

The fifth killing took place in Gulshane Iqbal town where a Shia youth was shot Martyred by the same terrorist of TTP when the Young Shan Muhammad Bux was riding a motorbike, Pir Mohammad Shah, a senior police officer told AFP.

The Terrorist of SSP , who were following The Young Shan Muhammad Bux, who was the care taker of the Zuljinah ( As a sign of respect the Horse which is never riden by anybody through out his life ,and Brought up as a replica of Imam Hussain’s (a.s) Loyal Horse in Karbala, and is regard as a sign of respect , who was being an Animal was better than the Blood thirsty Yazeed and his Co ordinators , Opposing the Grand Son of the Prophet Muhammad PBUH , and due to the Personal grievances and enmity martyred him with his family and Companions ) .

As Shan Muhammad Bux was riding on his Bike , alongside the Zuljinnah on the Road Side in Azeem Goth/ Dhora Jee area of Gulshan e Iqbal, Karachi, the Takfiri terrorist of SSP  Intercepted him and fired several rounds , and at the same time fired at the Zuljinnah, which resulted in the Martyrdom of Both at the spot.

On 1st Nov , Six Shia Hazara Coal miners were were targeted and Martyred while another was injured in Mach area of Kachi district – about 90 kilometers off Quetta – on Friday.

“The victims are labourers who belonged to the Shia Hazara community. It is clearly a sectarian targeted killing,” DC Kachi Waheed Shah told Express Tribune.

The coal miners were returning from a trip to Mach bazaar, where they often went to shop on Fridays. The crime scene is seven kilometer off the main highway.

“As they crossed a huge drainage off the national highway, a group of armed men opened fire at their vehicle,” added DC Shah.

Levies officials and security forces reached the spot soon after the incident and cordoned off the area. However, the assailants had already escaped by then.  The injured is said to be in a critical condition.

Lashkar-e-Jhangvi, another Off Shoot of the TTP is Most active in the Balochistan and have been involved in the target Killing and Bomb attacks on the Shia Community and the same Takfiri Terrorist were the pelperators of these Henious crimes.

On 26 Oct , seven passenger buses of Shia pilgrims were attacked with a car bomb. The blast killed two personnel of Frontier Corps (FC) while Shia pilgrims remained unhurt in the attack.

Upon observing a car suspiciously parked near the highway, FC personnel stopped the buses from proceeding on the National Highway in the Dringar area of Mastung. As they tried to search the vehicle, a explosion took place.

On 1st Nov , A former DS Rangers Zafar Jafari and his friend Nazim Hussain were targeted and fired upon by the same Taliban Terrorist , due to which both were fatally injured .

As per the details both were rushed to the Hospital , but due to the fatal bullet wounds , both embraced Martyrdom .

As the Wahabi TTP terrorist have no mercy for any Muslim and are Killing both Sunni and Shia Sect Members , Just to fan sectarianism and Anarchy in the Islamic Republic of Pakistan , as per their Zionist Infested , Saudi propogated agenda of Hatred and Sectarianism , they targeted Ghulam Nabi who was a Shia and Muhammad Kareem , who was the follower of the Sunni Sect, it should be noted that these Wahabi terrorist Organisation SSP , which has Renamed as ASWJ is even hood winking the Sunni Sect Innocent People even as it has even been Proven on record their terrorist are Killing Member of Shia and Sunni Sect Both , regardless of their Sectarian association. But Just to gain the sympathy of the Majority Sect , they are in the disguise of the Sunni Sect .

Ghulam Nabi and Muhammad Kareem were Mechanics by Profession.

On 28th Oct , The Bodies of two Real Shia Brothers Tahir Hussain and Aleem Hussain were recovered from the stream in Hangu District .

As per the details both the Brothers were abducted on Gun Point by the TTP Terrorist , on sectarian grounds and the Post Mortem report tells that both were severely tortured , before they were Martyred By firing on them . and after ward their Bodies were thrown into the stream.

On 25 October , Another Shia Man Syed Tahir Zaidi was ambushed near Abdullah College in North Nazimabad’s Block A , by the same TTP Terrorist , He was shot Multiple times and was fatally injured . After the attack as the terrorist sped away . Tahir was rushed to the Hospital . But He breathed his Last on his way to the Hospital , and embraced Martyrdom.

On Oct 22 , A Shia leader of the defunct Sipah-i-Muhammad, Dr Ghulam Raza Jafri , 41 was shot dead at Shalimar on Tuesday.

Civil Lines Division SP Maroof Safdar Wahla said Dr Raza was stopped by two armed motorcyclists who sprayed a volley of bullets and fled, killing him on the spot.

He said Dr Raza Jafri would visit Lahore from Quetta to pursue the case of the Ghulam Raza Naqvi & Shabbir Shah who were been accused of Azam Tariq’s Murder , since his Murder in 1994. On Tuesday, he reached Singhpura by an auto-rickshaw and as soon as he got down, the armed men targeted him.

Dr Ghulam Raza was pursuing the case for the release of his colleagues.Molana Ghulam Raza Naqvi and Shabbir Shah , who are been acquitted or granted Bail in most of the cases but have still not been released , while on the contrary Malik Ishaq a Notorious Killer and a acclaimed Terrorist , who have even confessed the Murder of Shia Community Member in Public have been released and have been again busy in his terrorist activities and Propagating Sectarianism , but due to his Saudi Sponsors , he is enjoying all the Previliges.

The murder of Dr Raza sparked anger among the Shia community.

On the same day in Karachi the terrorist of the SSP ambushed a Shia Resident of Ittehad Town , Ali Raza s/o Yousuf Ali , in the vicinity of Toori Bangash Colony .

Due to the firing he was critically injured and was rushed to the Agha Khan Hospital , but he could not survive and sccumb to his Bullet wounds and embraced Martyrdom.

On 14th Oct , Around Mid Night , another Shia Muneer Hussain was targeted by the same Brand of Terrorist of SSP / TTP , at the Hussaini Chowrangi , in Majeed Colony , Landhi ,Karachi.

Both were Motor Mechanic By Profession , The Body of Shakil was taken to the Imambargah Shuhuda e Karbala , Sadaat Colony, for His funeral .

It is a very Sad to Report that the Shia Community is always Put under Heavy Pressure even by the Govt.  despite of the fact that it has been mercilessly been killed and conitnously being targeted by the terrorist , which were even created by the Pakistani Establishment .

As the Shia Resident of Qasba Colony took to the streets to Protest the Shia Killing , the Biased City Administration , instead of apologizing of their negligence , due to which terrorist roam free and Kill Innocent Shia Men , came Heavy Handed and arrived in full force at the Scene of the Protest and Baton-charged the Protestors to disperse them .

Karachi, a city of 20 million people which contributes 42 per cent of Pakistan’s GDP, is rife with murder and kidnappings and has been plagued for years by ethnic, sectarian and political violence.

The latest attacks came ahead of the beginning of the Muslim holy month of Moharram, which is even the Beginning of the New Islamic Year , when Muslims mourn the seventh century martyrdom of Hazrat Hussain a.s , the grandson of prophet Mohammad (PBUH), along with his family members.

Shias make up around a 24% of Pakistan’s predominantly Sunni Muslim population.

Police and LEA’s are already carrying out a much talked about operation against criminal groups but the results shows that the Operation is tilted towards Political Outfits , and the Basic cause of Terrorism , and the root of terrorism The Taliban elements Present in the Metropolis still enjoys the Backing of the Establishment , as No Grand Operation or even any Reasonable Operation has still not been carried against the Taliban Groups Present in the City , and some areas which are totally under their influence are still NO GO Areas for the common Man and even for the LEA”s , and as they roam free and Plan their criminal activities from these areas as these areas are safe heavens for them , while these areas have already being notified by the Chief Justice and the LEA ‘s Heads.

No Operation is being carried out against them , to cleanse the city with these terrorists , most of whom have been Imported from the FATA, who are now recruiting the Local petty criminals also and training them into Hardened Terrorists, which were already associated with the ethnic and National Political Parties of the Metropolis , and these Parties also look like they have been hijacked by these Criminal elements as they are also performing Terrorist duties for these Local Political Parties also, and if these parties dis associate themselves from these Criminal Elements , then they fear that they might loose their fire Power and Force which they use to terrorize their Opponents and at the same time if these Criminal elements , stand against them , then they might also can tell the Party  secrets to the LEA’s and Plus the Public will also come to know of their Dirty Politics , who think that they are their saviors, and are giving sacrifices to Provide them the Much needed Protection they require to survive in this Urban Jungle.